Chérie Rivers Ndaliko and her husband, Petna Ndaliko Katondolo, run Yolé!Africa, which provides a space for youth in eastern Congo to thrive despite the region’s deadly conflict. (photo by Steve Exum)

In 2010, Chérie Rivers Ndaliko and her husband, internationally acclaimed Congolese filmmaker and activist Petna Ndaliko Katondolo, traveled to 33 colleges and universities around the country to show their film, Jazz Mama, which documents the strength of Congolese women in the face of upheaval and violence. Before showing the film, she asked audience members if they knew anything about the conflict in the Democratic Republic of Congo.

Few, if any, raised their hands. Ndaliko knew she had more work to do.

In the face of the economic conflict raging in Congo in which American consumers are complicit, “there’s no chance the political situation in the Congo is going to change when Americans have no idea that there’s anything even happening,” she said.

Social justice is Ndaliko’s passion, and she appreciates that she has found a space for it in academia. As an assistant professor of music and interdisciplinary scholar, Ndaliko researches and teaches about the intersection of creativity, conflict and social change in Africa. In addition, she and her husband run Yolé!Africa, an organization he founded that provides youth in eastern Congo the space, skills and alternative education necessary to thrive despite the deadly conflict in the region.

Ndaliko finds that the classroom gives students a safe space to discuss social justice issues. “People who are at a point in their lives where they’re really trying to form their values and figure out how they want to shape their adulthood — having these kinds of conversations is really powerful,” she said.

“As scholars of culture, we have very clear insight and recommendations that need to be considered on par with recommendations from engineers and doctors and economists.” 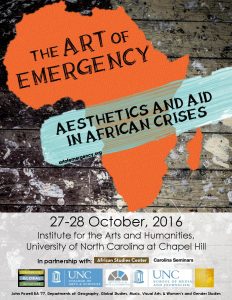 Such conversations will be part of a conference at UNC-Chapel Hill in Oct. 27-28, “The Art of Emergency: Aesthetics and Aid in African Crises.” Ndaliko is partnering with a fellow at the Mahindra Humanities Center at Harvard University, Samuel M. Anderson, to bring together an interdisciplinary mix of scholars, artists, community organizers and students to examine the relationship between creativity and humanitarian aid in conflict regions.

Her new book, on cultural activism and art in the Congo, Necessary Noise: Music, Film and Charitable Imperialism in the East of Congo, will be published in October.

While some nongovernmental organizations and humanitarian agencies attempt to address problems, few of them engage with the local community enough to guide long-lasting change, she said. What’s often lacking is an emphasis on developing critical thinking skills.

“That’s a prime example of the value of a humanities education,” she said. “As scholars of culture, we have very clear insight and recommendations that need to be considered on par with recommendations from engineers and doctors and economists.”

The conference is designed to be interactive and create discussions around best practices for social justice work.

“That kind of shift in thinking leads directly to structural change,” Ndaliko said. “It empowers people who are on the ground to be owners and agents of that change and to direct it as they see fit.”