“We are now in a peak of tension over racial demonstrations here. … On Saturday, the 14th, I decided to go to jail. It was no fun at all. There were 3 of us … we went to Leo’s, were arrested and hauled to jail. The police were nice except for the one who dragged me into the car. … Last night 46 people were arrested. Tonight 28 were arrested. … The campus opinion on this, to me, is largely indifferent.” 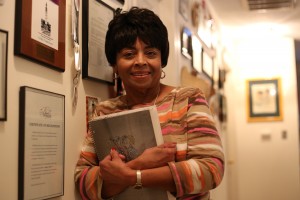 Karen Parker, the first African-American woman to enroll at UNC, holds her diary from her time at Chapel Hill. (photo courtesy of UNC Communications)

Last year, student interns at the Southern Oral History Program interviewed 16 of the “Black Pioneers,” African-Americans who attended UNC-Chapel Hill from 1952 to 1972 and were the first students to desegregate the University.

The SOHP interns documented and performed staged readings of the stories of people like Karen Parker and Edith Hubbard, the first and second African-American women to enroll at Carolina, and James Womack, UNC’s first African-American cheerleader.

Charlotte Eure ’16, a women’s and gender studies and communication studies double major, recalled how meaningful her interview was with Womack. In one of his classes, Womack received A’s on his papers and exams but was given only a C for his final grade, she said.

“The professor told him that even though Mr. Womack worked hard and did well, that was the best grade he could give him,” Eure said. “The thing that really stuck with me the most after his interview was how palpable his pain still is after all this time. To bear witness to his pain was humbling and eye-opening.” 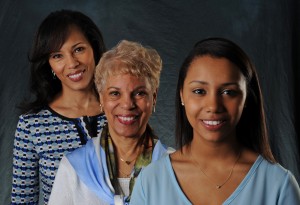 The interviews will become part of the SOHP’s archives in the Southern Historical Collection in Wilson Library and will be adapted into a performance by UNC alumni who are professional actors for UNC’s Process Series, on Nov. 4 at 8 p.m. and Nov. 6 at 3 p.m. at the Sonja Haynes Stone Center for Black Culture and History.

“It was particularly meaningful for our students to be talking to these Black Pioneers in a year when there was so much discussion about race on campus,” said Rachel Seidman, acting director of SOHP. “We are glad that their work will be shared with a much broader audience. It’s an important story for us to tell.”

Education major Alex Ford ’16 is teaching English in South Korea through the Fulbright Program and eventually hopes to teach social studies. She interviewed Hubbard for her project. Ford said the University can learn a lot about the way African American students were treated in the past and how that can help shape the present.

“To have this opportunity to talk to people who not only experienced this pivotal time in Carolina’s history but had an impact on it — that was incredible to be able to talk to them about their lives.”