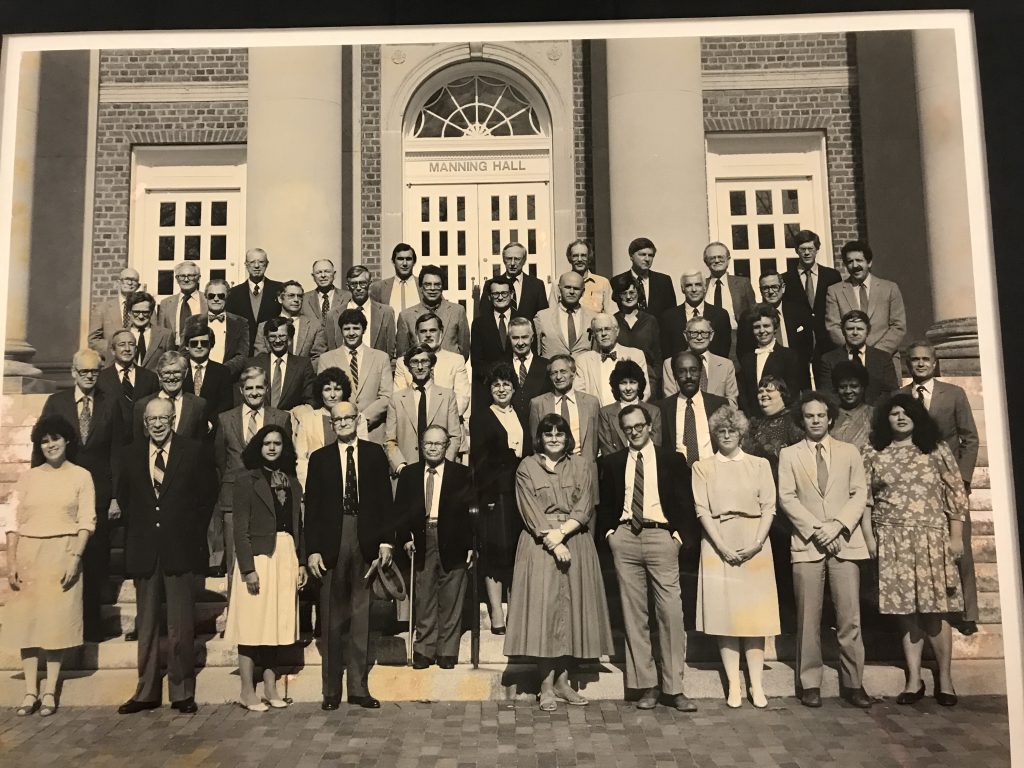 #Throwback: This 1986 photo shows Colin Palmer (second row, fourth from right). , with his history department colleagues. That year he became the first African-American to chair a department at UNC. Did you take a class with Professor Palmer? We’d love to hear from you. Email us at college-news@unc.edu. (photo courtesy of University Libraries)

Colin Palmer became the first African-American chair of a department at UNC-Chapel Hill when he was appointed to lead the history department in 1986, a post he held until 1991.

Before that, he chaired the curriculum in African and Afro-American studies from 1980 to 1988 and for two years — from 1986 to 1988 — actually led both academic units, a feat that many of his former colleagues still admire today.

“I marveled at how he could chair two units, but he did it effortlessly and also continued to publish as a scholar and teach classes. He did it all wonderfully well,” said history professor Melissa Bullard, who served as director of undergraduate studies during Palmer’s tenure. “He was very fair-minded and helped create an atmosphere of trust and collaboration in the department.”

She hasn’t seen her former colleague in 25 years, but she had an opportunity to welcome him back to campus the week of Feb. 19 for several events in his honor.

“In the context of Black History Month, he stands out as someone who has made very important contributions,” Bullard said. 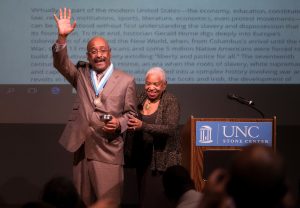 Colin A. Palmer (left), with history professor Genna Rae McNeil, was honored with the Award for Scholarly Distinction during the 14th annual African-American History Month Lecture. (photo by Jon Gardiner)

Palmer, a scholar of the African diaspora and Dodge Professor Emeritus of History at Princeton University, was honored at the 14th annual African-American History Month Lecture with the Award for Scholarly Distinction on Feb. 21. He was also named as the most recent honoree of the University’s Bridge Builders scholarships. At the talk, Gerald Horne of the University of Houston discussed “Why Black Lives Do Not Matter: Re-Thinking the Origins of the USA.”

A private luncheon was held on Feb. 20 in Palmer’s honor, and he met with graduate students during his visit to campus.

Palmer said in a phone interview that he is excited about the homecoming and the opportunity to “see old friends and have some good food.” When he first came to UNC-Chapel Hill to chair the curriculum in African and Afro-American studies, it “was undergoing a lot of turmoil,” he said.

He told The Daily Tar Heel in 1980: “My commitment as director is to improve and strengthen academic aspects of the program through a focus on scholarship.”

As he reflected on that time, Palmer said, “I think I succeeded in not only bringing stability to the program but also in elevating its prestige. … It became a department after I left the chairmanship, but I helped to lay the groundwork.”

The curriculum is now known as the department of African, African American and diaspora studies.

A 1989 letter from then-College of Arts & Sciences Dean Gillian Cell to Chancellor Paul Hardin echoed that sentiment. “Under his [Palmer’s] leadership and with the firm support of both my predecessor and myself, the curriculum grew in reputation both on and off campus and became the largest such program in terms of enrollment in the country.”

Palmer won the 1986 Tanner Award for Excellence in Undergraduate Teaching, and he looks back fondly on his introductory Afro-American studies course.

“When I left teaching, it had grown to around 300 students,” Palmer said. “It was a fun course to teach because I reached black and white students and could laugh with them and challenge them.”

Joseph Jordan, director of the Stone Center, noted that Palmer is being recognized not only for his institutional contributions but his scholarship, calling him “a giant in African-American and diaspora studies.”

“He came along at a time when the field was about to make a turn,” Jordan said. “African-American studies had been around since the mid-’60s, but for the most part any international focus tended to be on Africa. When he came along, he led us toward the diaspora and a new understanding of black people in the world.”

Palmer is the author, editor or co-editor of 17 books. He chronicles the history of the Caribbean in the wake of British and U.S. imperialism in a trilogy of books published by UNC Press — “Freedom’s Children: The 1938 Labor Rebellion and the Birth of Modern Jamaica,” “Cheddi Jagan and the Politics of Power: British Guiana’s Struggle for Independence” and “Eric Williams and the Making of the Modern Caribbean.”

Palmer is currently working on what he calls his final work, a book that “rethinks the history of Jamaica and the history of the West Indies as a whole.”

“I’m looking forward to reading it,” he said with a laugh.