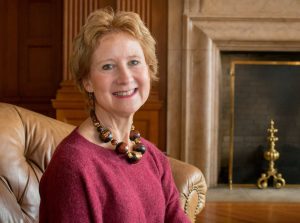 Elizabeth G. Taylor, who came back to campus to deliver this spring’s Frank Porter Graham Lecture, says an English degree has been key to her success. (photo by Kristen Chavez)

Elizabeth G. Taylor considered priesthood and later landed in law school. Now she has found her calling fighting for the rights of low-income individuals and families to have access to health care.

Taylor (English ’76) is executive director of the National Health Law Program (NHeLP), founded in 1969 at the UCLA School of Law. For nearly five decades, the nonprofit’s lawyers have litigated cases around the country and provided expertise to advocates at the state level. NHeLP is considered the national expert in Medicaid law and policy.

“Right now, we have been working overtime,” Taylor said, noting the organization’s 2017 efforts to fight the repeal of the Affordable Care Act and its current work to stem cutbacks to Medicaid funding and changes to the essential nature of the program.

NHeLP has grown significantly since Taylor joined in 2014, from an operating budget of about $5 million and staff of 31 to a more than $7.5 million budget and 43 employees. It has offices in Los Angeles, Washington, D.C., and Carrboro.

Much of the growth “is in recognition of how important our work is to protecting essential health care for low-income people,” said Taylor, of Chevy Chase, Maryland. “There’s an increasing awareness that our country is stronger if everybody has access to health care. And we’ve been at the center of this fight for a very long time.”

Taylor said an English degree has been a key to her success: “On the most practical level, I make my living using words to convey ideas, to persuade and to excite people. And studying great literature gives you an appreciation of the power of language and ways that language can be used to inspire and educate people.”

It also opens up worlds that one can’t otherwise access, she said.

“There’s nothing in my life that gives me an understanding of slavery, but Toni Morrison opens that door up for me a little bit,” Taylor said. “Sylvia Plath gives me a glimpse into what it’s like to battle depression. And Faulkner, whom I studied at Carolina, helped me to articulate the conflict between the things about the South that I’m proud of and the horrible things about southern heritage,” Taylor said.

Before NHeLP, Taylor was principal deputy associate attorney general at the U.S. Justice Department, working to defend federal health care initiatives and other issues. She also had a stint at a private litigation firm and early in her career clerked for Justice Harry Blackmun on the U.S. Supreme Court.

Carolina is a Taylor family tradition. Her father, mother and her mother’s seven siblings attended UNC. After graduation, Taylor won a fellowship designed to encourage students who might be headed in other directions to consider the ordained ministry. In her second year at Yale Divinity School, although she loved what she was studying, she wasn’t sure she was ready for ordination.

“I needed to figure out what my motives were and where I was going to do the most good,” she said.

A year later, she was enrolled at the University of Virginia Law School.

To honor their parents’ commitment to education, Taylor and her brother Bill (’66) endowed the William and Ida Taylor Honors Research Fellowship. Taylor returned to campus in February to deliver the Frank Porter Graham Lecture on “Health Care’s Seven Dirty Words.”

One of Taylor’s fondest memories at Carolina is the day an English professor handed the class an exam. “Write like angels,” he said before slipping out of the room.

“Literature gives you words for emotions and it teaches you to use words like music,” Taylor said. “Literature makes life richer. It’s about beauty. It’s about understanding. And it’s about using language effectively. We need more English majors, not fewer.”