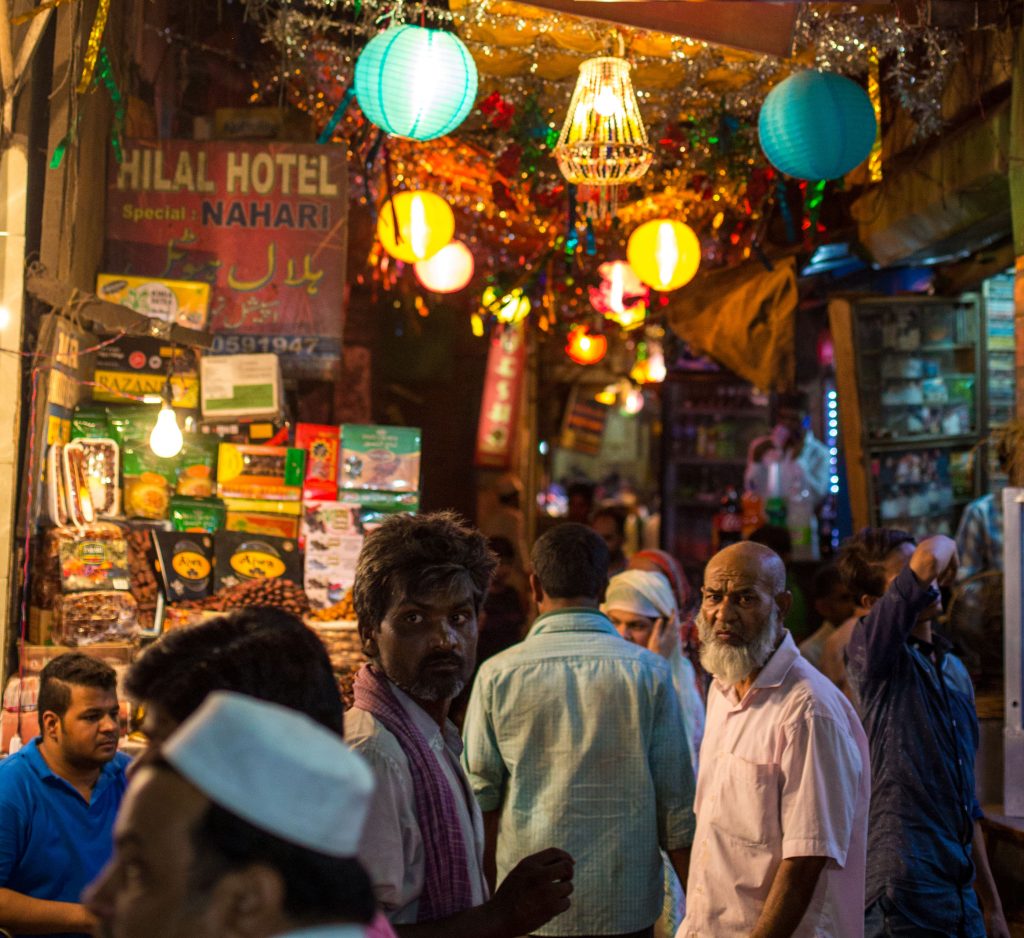 Scott Diekema captured vendors and shoppers at a night market behind the Jama Masjid mosque in Delhi, India. (photo courtesy of Scott Diekema)

Studying abroad once was considered an extravagance few could afford. Students today see global engagement as a fundamental part of their education, and many at Carolina have at least one study abroad experience on their transcript.

The College of Arts & Sciences’ robust Study Abroad Program offers more than 330 programs in 70 countries. By the time they graduate, nearly one-third of students in the College have completed an academic program abroad for credit, almost double the number who studied abroad in 2000.

In their infancy, study abroad programs were language-based. With Miles’ arrival came a shift from individual program offerings to a structure that allowed a comprehensive array of courses that aligned with the University’s academic objectives.

“We provide academic opportunities abroad that are consistent with the academic standards on this campus and that are of a quality appropriate for a Research I university,” Miles said.

The courses mirror the rigor as well as breadth of teaching within the College, he explained.

Early on, the majority of students who studied abroad concentrated on Western Europe, but the number of students studying in Asia, for example, has increased dramatically — from about 15 in 2000 to some 250 a year today. Likewise, language and social science programs in Africa and the Middle East, as well as in Latin America (which has been an academic focus within the College since the 1940s), are expanding.

To help students overcome the financial challenges of studying far from home, donors have stepped up to fund new scholarships. But more is needed to meet Dean Kevin Guskiewicz’s goal to increase the number of Carolina students studying abroad to 50 percent over the next decade. Raising money for study abroad scholarships is a major priority as the University launches a comprehensive campaign this fall.

A big part of the job for the Study Abroad Office is helping students navigate the unknown. Its campus partners include Scholarships and Student Aid, the registrar, Academic Advising and the Dean of Students. Staff members steer students toward programs that complement their academic interests and provide reassuring information for students and parents alike. They help students negotiate foreign airports, different cultures and unfamiliar currency.

“We are a resource for any problems that arise while the students are abroad,” Miles said. Until last February, Amanda Davis had never flown on a plane. The farthest she had traveled from her home in Rocky Mount, N.C., was to Florida.

That didn’t stop Davis from signing on for a 24-hour flight to Sydney, Australia.

“The more I talked with my adviser, the more I realized that the program at the University of Sydney was a good fit,” said the senior majoring in linguistics with minors in speech pathology and studio art. “I really didn’t concern myself with how long the trip would take.”

Over four months, Davis took courses in “Aboriginal Australian Languages,” “Child Languages,” the “Philosophy of Happiness” and the “Fundamentals of Glass Blowing.”

Outside the classroom, she assisted with speech and voice research. One project involved assisting in developing an app for kids with speech disorders; another focused on collecting data on distinct vocal onset times. (Vocal onset indicates that a person has begun producing sound based on the way the vocal chords fold.)

“It’s helpful to have access to vocal onset data because a therapist can then tell, for instance, if a person has a creaky voice or a breathy voice,” explained Davis, who is applying to graduate school for speech and language pathology.

For someone fascinated by the spoken word, studying in Australia — with its rich history of language — was a dream come true, aided by financial support from the Jan & Steve Capps Study Abroad Fund. A self-described introvert, Davis discovered that she had to venture far out of her comfort zone. She soon learned she was comfortable facing new situations on her own.

“Before I left home, I was a little worried about getting to know people outside the Carolina community,” she said. “But as I met people from all over the world, I realized how much I enjoyed learning about people from different countries and backgrounds.”

Davis intentionally sought out non-American students in her classes, and before long a core group of five friends from different countries bonded. “We would compare how things are done in each country, what the customs are, how things are expressed,” she said.

Her course schedule also allowed time for travel and exploration around Sydney and Melbourne, and Davis even worked in a solo trip to Cairns to scuba dive in the Great Barrier Reef. “That was the absolute highlight of my time in Australia. It was incredible!” she said.

She also took a 10-day trip to Thailand with a good friend between the end of classes and her exams. For anyone considering study abroad, Davis advises, “Don’t stick to what’s familiar. There is so much growth in meeting new people, and they become lifelong friends.”

The entrepreneur for social good 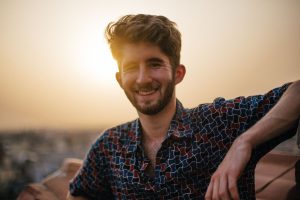 Scott Diekema looks out from the roof of Jama Masjid, one of the largest mosques in India, as the sun sets over Delhi. (photo courtesy of Scott Diekema)

Scott Diekema has always wanted to help make the world a better place. It’s something his parents, both physicians in Iowa City, Iowa, instilled in him early on.

In high school, he co-founded an effort to benefit children born with clubfoot in developing countries. Within weeks of his arrival on the UNC campus, fellow students Keegan McBride ’17 and Lauren Eaves ’18 approached Diekema about opening a student-run café in the Campus Y.

That conversation evolved into The Meantime, a student enterprise that’s part of the UNC Social Innovation Initiative. The Meantime serves fair-trade brews and baked goods at a coffee stand inside the Campus Y, but it’s also a testing ground for other student-run food ventures. All profits are invested in student grants. Last spring two sophomores were awarded inaugural Bridge Year Fellowships to pursue a year of international public service before their junior year.

“It’s easy to study business at UNC, but there aren’t many on-campus enterprises where you can gain meaningful professional development while also getting paid — and find a way to give back in the process,” said Diekema, CEO of The Meantime.

Before he arrived on campus, Diekema took a gap year that included three months in Nepal, where he spent time living in a Tibetan Buddhist monastery. That experience fueled an interest in South Asian religion and philosophy, and ultimately led the Morehead-Cain Scholar to enroll in UNC’s 2017 Summer in India program as one of Carolina’s Phillips Ambassadors. (The privately funded Phillips Ambassadors scholarship program supports student study in Asia. The Summer in India Program has been taught for nearly 20 years by John Caldwell and Afroz Taj in Asian Studies.)

Diekema’s study included three courses: “Contested Souls,” which explored the literature and multifaceted culture of India; “Journalism and Society in India,” which examined the country’s news framework; and “Hindi Conversation and Script,” which focused on the fundamentals and nuances of the language. 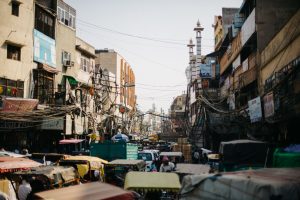 Rickshaws and trucks travel through the streets in Chandni Chowk, a busy market in the heart of Delhi. (photo courtesy of Scott Diekema)

“Thanks to amazing UNC professors, I learned a ton about the nuances of India’s rich history and culture,” Diekema said. “There really is no unified Indian identity because this country has hundreds of unique languages and cultures. While that has created conflict, it has also made India the beautiful melting pot that it is today.”

Not quite ready to leave Delhi at the program’s end, Diekema stayed on for an eight-week internship as a research assistant for the Just Jobs Network, a private think tank that examines emerging trends affecting employment around the world.

Diekema, a junior, is combining majors in philosophy and Asian studies with a minor in entrepreneurship, and he intends to continue taking advantage of available learning opportunities, both on and off campus.

“Most of all, connecting with people from dramatically different backgrounds than mine helps me develop empathy,” he explained. “If everyone went out of their way to spend time with people who weren’t like them, I believe the world would be a much better place.” 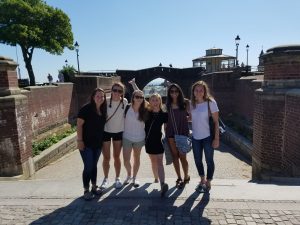 As part of UNC’s Science in Scandinavia Program, Shruti Patel (second from right) and her classmates spent time in Helsingborg, Sweden, walking by the water. (photo courtesy of Shruti Patel)

Shruti Patel is ready to display her fourth piece of international memorabilia on her wall: a postcard from Lund, Sweden, signed by the participants in UNC’s 2017 Science in Scandinavia program.

The six-week program was hosted this summer at Lund University, where the students took three courses — “Analytical Chemistry,” “Analytical Chemistry in Medicine” and the “Introduction to Swedish Language and Culture” — and worked in some weekend travel to explore Scandinavia.

For Patel, a sophomore from Candler, N.C., enrolling in such a chemistry-intensive program wasn’t part of the plan when she came to Carolina.

“In high school I absolutely dreaded chemistry … It was doable, but definitely was not my calling at the time, and I was terrified coming into Carolina knowing I had to take Chem 101 and 102,” she said. “But as I took those classes I realized I loved chemistry and wanted to pursue it.”

The fast pace of the courses in Sweden, which condensed several months of material into a few weeks, took some getting used to, Patel said. But the course material in conjunction with the travel experiences taught the group to rely on one another, creating a kind of family away from home that the students hope will continue back on campus.

“We needed to buckle down and do the work, but we weren’t stuck in our rooms. People would pile in the lobby and work together, the professor right there as well,” she said.

The analytical chemistry classes were similar to those offered on campus, she said. In addition, guest speakers talked about unique scientific innovations and examined the interface between science and medicine. 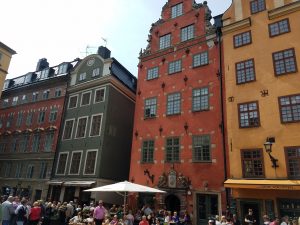 Patel isn’t sure yet which realm of science she will ultimately pursue, but she hopes to couple it with a second major in peace, war and defense. “Listening to the course speakers talk about their new ideas was truly eye-opening,” she said, “and being undecided about my major really makes me open to everything.”

Her advice to students considering study abroad is to “definitely put yourself out there. Always think about taking a risk because there’s something good about a risk factor, and leave your expectations at the door.”

Facing the unknown, she found, is empowering. “I learned that I can take care of myself and handle whatever comes my way,” Patel said.

Patel hopes to fill her wall with memorabilia from visits to all 195 countries outside the United States. Besides the postcard from Sweden, she has a wooden carving of a lizard from Costa Rica, a peacock feather in a shadow box from India and a tassel from Kronborg Castle in Denmark.

Four down, 191 left to experience.

Students unable to be away from campus for a semester or a six-week summer program will have a new study abroad option next year, when the College debuts a three-week Global Mini-Mester Program in summer 2018.

Patterned after the successful Maymester Program, in which students immerse themselves in one course with daily classes for three weeks, the new program is designed to serve students who otherwise might not consider study abroad.

Each course will be offered once during the summer, at different times, depending on the faculty member’s schedule and available resources onsite.

“We hope this program will encourage more students to study abroad,” said Bob Miles, associate dean for study abroad and international exchanges. His office will use feedback from students and faculty in the inaugural Mini-Mesters to fine-tune the program.