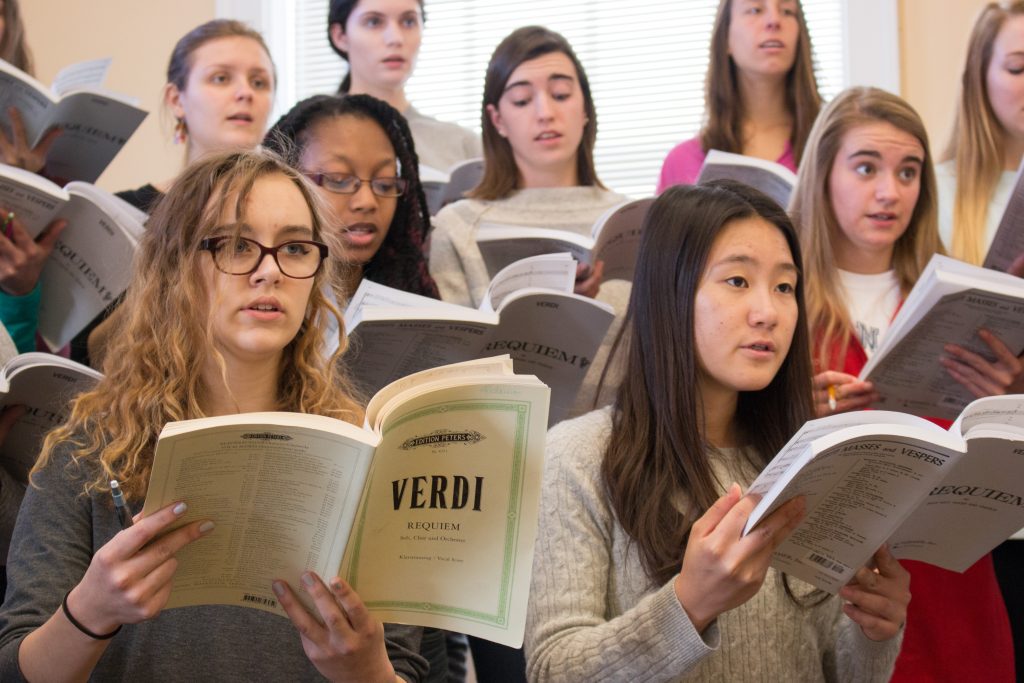 Members of the Carolina Choir, one of four choral groups performing the Defiant Requiem, practice at a rehearsal led by Susan Klebanow. (photo by Kristen Chavez)

Hungry and tired, the 60 Jewish prisoners nevertheless sang — without scores or orchestral accompaniment — one of the most demanding choral works ever written: Giuseppe Verdi’s Requiem Mass.

Sixteen performances with up to 150 singers each, all in the Theresienstadt concentration camp in Terezín near Prague, culminated in a June 23, 1944, presentation to Nazi officers. International Red Cross guests were also present. Nazis wanted to convince the visitors that the prisoners were treated well. 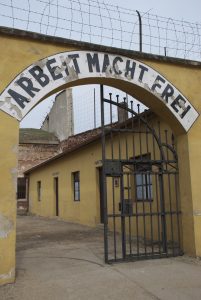 The translation of the inscription over the gate at Terezín is “Work will make you free.” (photo courtesy of Partisan Pictures)

Not so, said Rachel Gelfand, a UNC doctoral candidate in American studies and granddaughter of choir survivor Edgar Krasa: “There was overpopulation, death and disease.”

Conductor Rafael Schächter, who had but one score with which to teach the piece, used the word “defiance” for the concerts, drawing on the lyric “…and nothing shall remain unavenged.”

He told the group, “We will sing to the Nazis what we cannot say to them.”

The Defiant Requiem will be performed in a Memorial Hall concert April 20 by the 90-member UNC Symphony Orchestra and some 200 vocalists from all four student choral ensembles.

“We’ve only combined all the ensembles a very few times over the years, for very big occasions,” said music professor Susan Klebanow, who directs two of the four: the Carolina Choir and UNC Chamber Singers. Also performing: the Men’s and Women’s Glee Clubs, directed by Daniel Huff and Sue Klausmeyer.

With narration and film footage interspersed, “this will be a moving theatrical experience,” said music professor Tonu Kalam, conductor of the orchestra, made up of UNC students and a few recent graduates. “There is a sense of operatic drama throughout — extremes of dynamics, orchestration, tempo and character,” he said. “Much of it is somber, as by definition a requiem is a Mass for the dead, but there are very hopeful, ethereal passages as well.”

The concert will conclude a semester-long College focus on the Defiant Requiem, with smaller concerts, a film screening that was held in February and an early spring academic conference on musical responses to trauma. The events are part of the initiative “Carolina’s Human Heart: Living the Arts and Humanities.”

Two years ago, after a talk he gave at UNC for the Carolina Center for Jewish Studies, alumnus Stuart Eizenstat ’64 wondered aloud about the potential for the Defiant Requiem at UNC. He has worked in government roles including White House adviser and is board chair of the Defiant Requiem Foundation.

Ruth von Bernuth, associate professor of Germanic literature and director of the center, contacted the music department. The center, the department and the Defiant Requiem Foundation are presenting the performance.

It’s impressive that the weakened prisoners sang the Requiem, Klebanow said: “It requires great strength and endurance. The singers are standing for 90 minutes to two hours. They have to sing their highest possible notes and their lowest possible notes, and they’re singing long phrases, so they need excellent breath control.”

The performance will be a new way of teaching about the Holocaust, von Bernuth said. “It’s a part of history we should never forget.”

Admission is $10 for the 7:30 p.m. concert, $5 for UNC students, faculty and staff. Information: http://tinyurl.com/zfpcokl. Tickets: tinyurl.com/z579rqb

The Defiant Requiem is part of the “Carolina’s Human Heart: Living the Arts and Humanities” initiative.

Read story in The Chicago Tribune about The Defiant Requiem.