Music professor Stephen Anderson, a critically acclaimed composer and pianist, has a knack for finding Latin rhythms wherever he goes — most recently, the Dominican Republic.

Steve Anderson surveys the group of college-age musicians — over 30 of them have squeezed into a small classroom to attend his master class at the National Conservatory of Music in Santo Domingo. Every eye is on him, bright and attentive.

“Carne!” says one of the students. 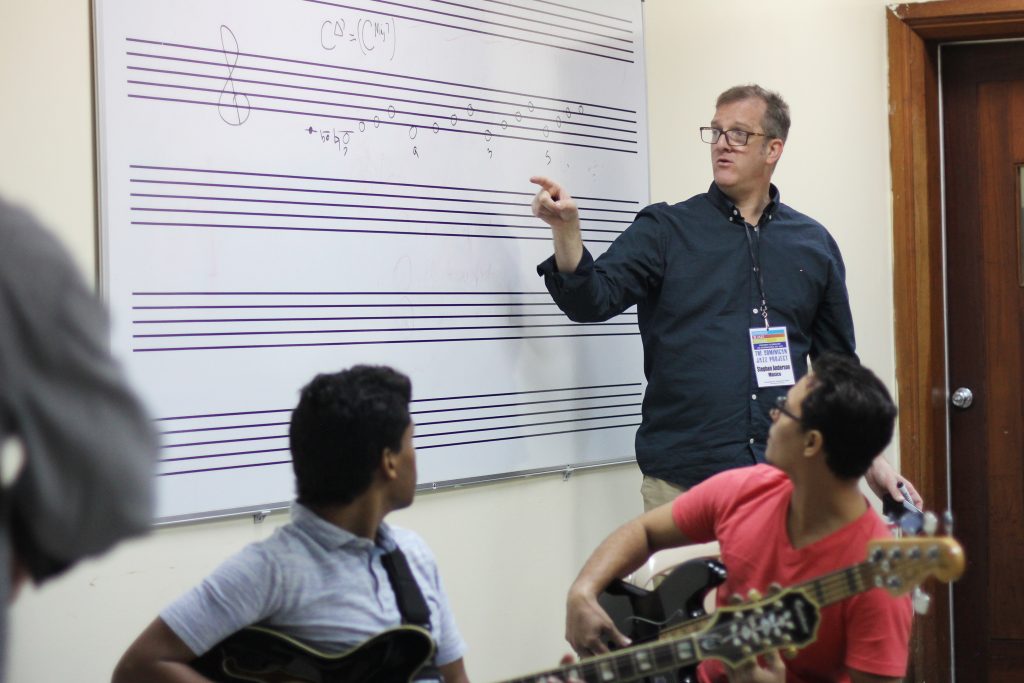 Anderson explains some of the theory behind improvisation in jazz composition at the National Conservatory of Music in Santo Domingo. (photo by Mary Lide Parker)

Constructing a jazz harmony is like throwing together a homemade stew, according to Anderson. “The meat is the arpeggio,” he explains. “Play a chord progression, and that’s your main substance. And you could just play that — the core element.”

In fluent Spanish, Anderson details how combining scales adds color to the harmony. “So those are two elements — the meat and potatoes,” he says. “But then you add the spice, the improvisation. Just like a stew that only had meat and potatoes — how would it taste? It would be kind of bland. How spicy you make it is really up to each individual chef.” 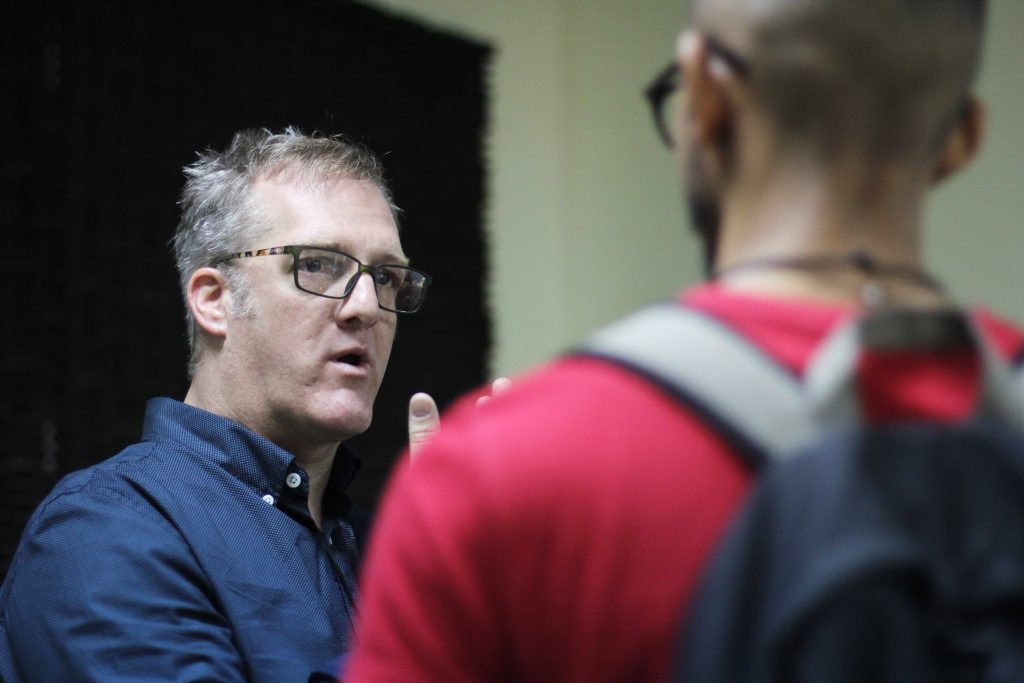 Anderson fell in love with Latin music as a college student — but he wasn’t anywhere near Latin America. Attending a university in Utah, he studied traditional jazz and classical composition and played in a country band on the weekends. To earn more money, he applied for a pianist position in a salsa band.

“It was all these guys from Colombia,” Anderson recalls. “They weren’t really educated in musical notation; they played just enough piano to show me what to do.” Through this process — no formal instruction, no reading music, just copying what he was shown — Anderson learned his first Latin rhythms. He was hooked.

Over the past few decades, no matter where he has lived, Anderson has always befriended musicians from Latino cultures. (He spent two years in Mexico, hence his Spanish fluency.) “We become good friends because I’m interested in their music, and I think they find me interesting because I’ve studied so much composition and theory,” he says. 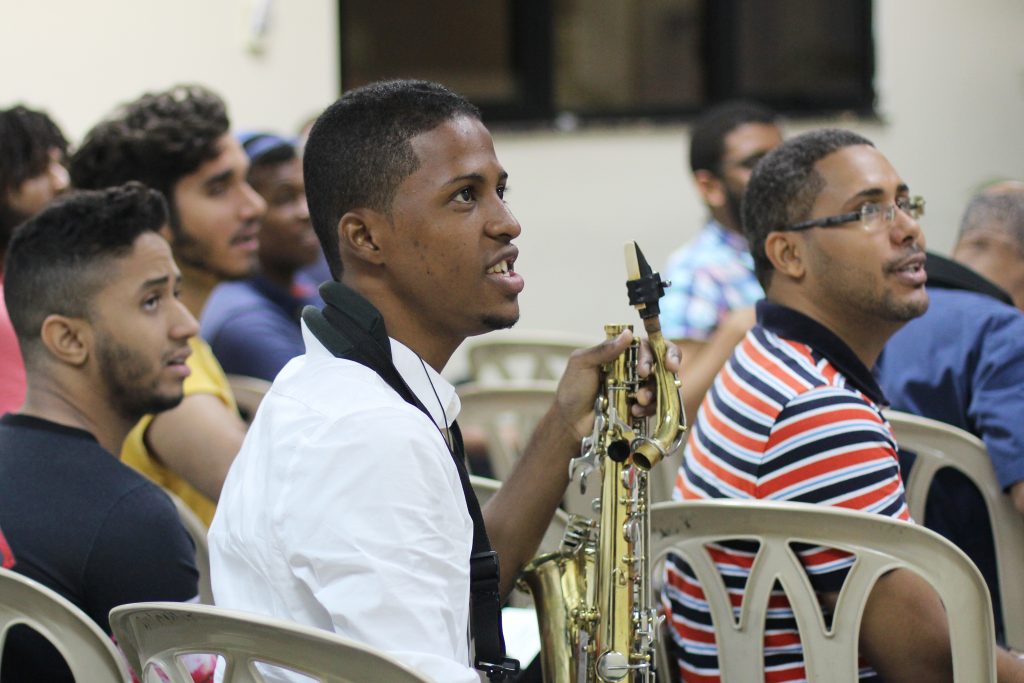 Students soak up the lecture by Anderson and Jeffry Eckels. (photo by Mary Lide Parker)

Three years ago, Anderson met Guillo Carias, a retired jazz musician from the Dominican Republic. “He played in the symphony there,” Anderson says. “He worked in Miami for years, but he retired to — of all places — Cary, North Carolina.” Carias regularly came to hear Anderson’s jazz trio play at a venue in North Raleigh, and the two became good friends. One night, out of the blue, Carias invited Anderson to play a concert in the Dominican Republic.

“I had played Puerto Rican jazz, Cuban jazz and Brazilian jazz, but never really Dominican,” Anderson says. “I didn’t know anything about it — but of course I said yes.”  Over the next several months, Anderson transcribed dozens of Dominican rhythms. “I looked up videos of people playing on YouTube,” he says. “I began to think about how I could write my music and fuse it with their music.”

When Anderson first traveled to the D.R. in 2014, he met musicians just as eager to learn from him — in particular, Guy Frometta, a drummer. “Guy and I were very like-minded, as he was interested in American jazz music and I was interested in Dominican music,” Anderson says. “So we were teaching each other. Mostly he was teaching me.” The result of that collaboration is The Dominican Jazz Project, a concert and music collaboration that resulted in a CD released on Summit Records in 2016. 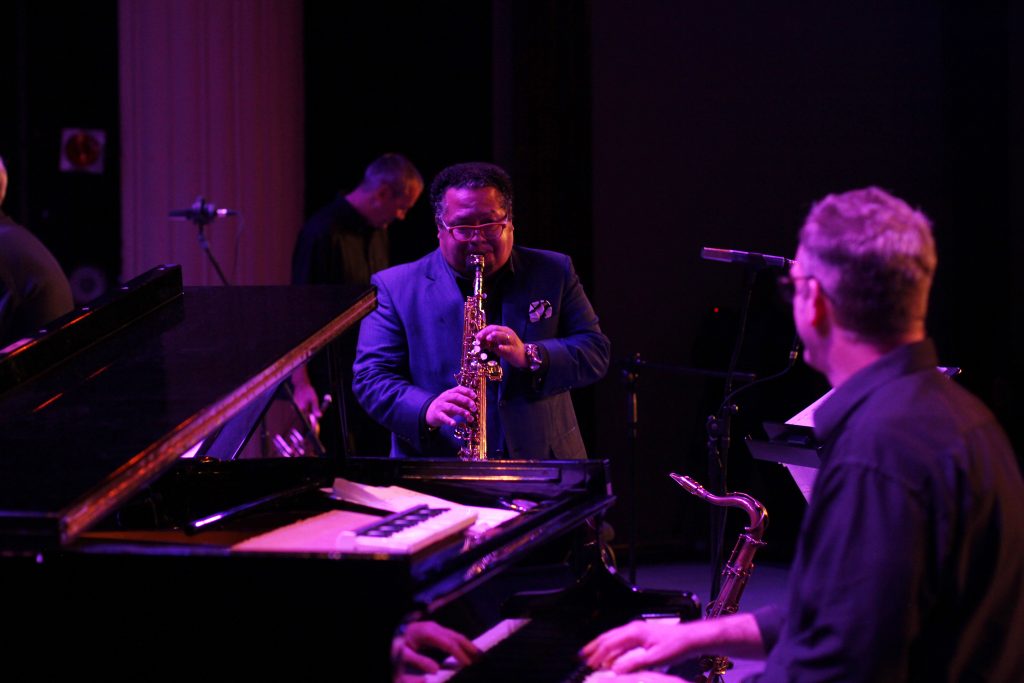 In spring 2017 Anderson was back in the D.R. to teach a master class and to perform at the Jazzomania Jazz Festival with the eight other talented musicians from The Dominican Jazz Project.

“Sometimes, especially in academia, people go out of their way to ‘have a cultural experience,’ but for me, it’s happened very naturally,” Anderson says. “I think the key is humility. Be interested, learn from other people, then step away from it. As a gringo, I’m not trying to ‘be a Dominican.’ In some ways that would be disrespectful. They wanted me to be myself and write my harmony but then fuse elements of their music with my ideas.”

The Dominican Jazz Project has been a prolific collaboration for Anderson and his fellow musicians, initiating unique teaching opportunities and creating lasting friendships. “When you have an opportunity to work very personally and intimately — sometimes you stay in their house and eat food with them — it changes everything,” Anderson says.

“What I’ve realized through this process is these guys are just like me. They are my brothers, and we felt that within hours just by playing music together.”

Story and photos by Mary Lide Parker ’10, a writer for Endeavors magazine.