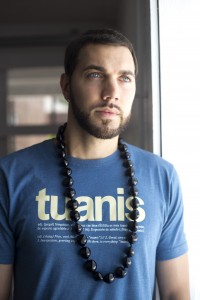 Q: What can you tell me about the long-form performance you will be workshopping at UNC in February for the Process Series?

A: It is an exploration of my life through the whirlwind of hip-hop and poetry. It seeks to address the questions: What does it mean to be a white kid in Durham, N.C., who loves hip-hop and is raised by a mother in an interracial relationship? How did hip-hop culture guide my personal experience, and how does it affect the experiences of other young artists around the world? How does my own background and personal experience affect the way that I engage and interact with others on a global level as a traveling artist?

Q: What makes spoken word poetry such a powerful form of storytelling?

A: I think the accessibility and the layers of communication. Page poetry, despite the power it holds in the words in and of themselves, lacks the presence of the voice, the cadence, the body, the expressiveness of the face. Storytelling in prose doesn’t always have as much vivid imagery, figurative language, charged emotion as words in verse. I think spoken word harnesses the elements of voice and body that are so powerful in conveying meaning through storytelling and infuses them with poetic language that makes the images dance and pulse and shatter. It also draws from the aesthetics of hip-hop, formal poetry, theater and debate which make it a diverse and multifaceted form of oratory.

Q: Tell me about the workshops you’ll also hold for students during that Process Series performance residency. What is it about working with students that inspires you?

A: The workshops will lead students in exploring their own complex, intersectional identities and articulating them through poetry and performance. Inevitably, these workshops provide unique insights, moments of vulnerability and courage which are ultimately what most inspires me. Seeing someone discover something, or at least discover how to articulate something that has been difficult to express, and do it in a way that connects with others in the room.

Q: Give me a few highlights of your work with the Next Level program, created by music professor and director of the Institute for Arts and Humanities Mark Katz. You’ve worked in Zimbabwe, Thailand, and in 2017 will be in Brazil? What do you hope to do in Rio?

A: It has really been an incredible experience. I went first as an MC/rapper on a team of artists that traveled to Zimbabwe. Then, for the second season of Next Level I was hired as a site manager, to basically oversee the program on the ground and support a team of artists that would be teaching and performing in a program similar to the one I was a part of in Zimbabwe. It’s now the third season, and I will be returning to serve as site manager for the Brazil residency in 2017. I love it. I get to be a fan and also an artist. I get to watch the other artists teach their classes, which in and of itself has taught me so much about pedagogy and about the other elements of hip-hop. It’s also cool because the artist teams know and respect me as another artist as well, so I often get called to jump into performances and shows which gives me the chance to be a part of the process on both ends. It has also been eye-opening and inspiring to see all the ways that hip-hop is fusing, tangling, Voltron-ing with other musical and artistic traditions in all the places that we go, so we get to be learners as well as teachers.