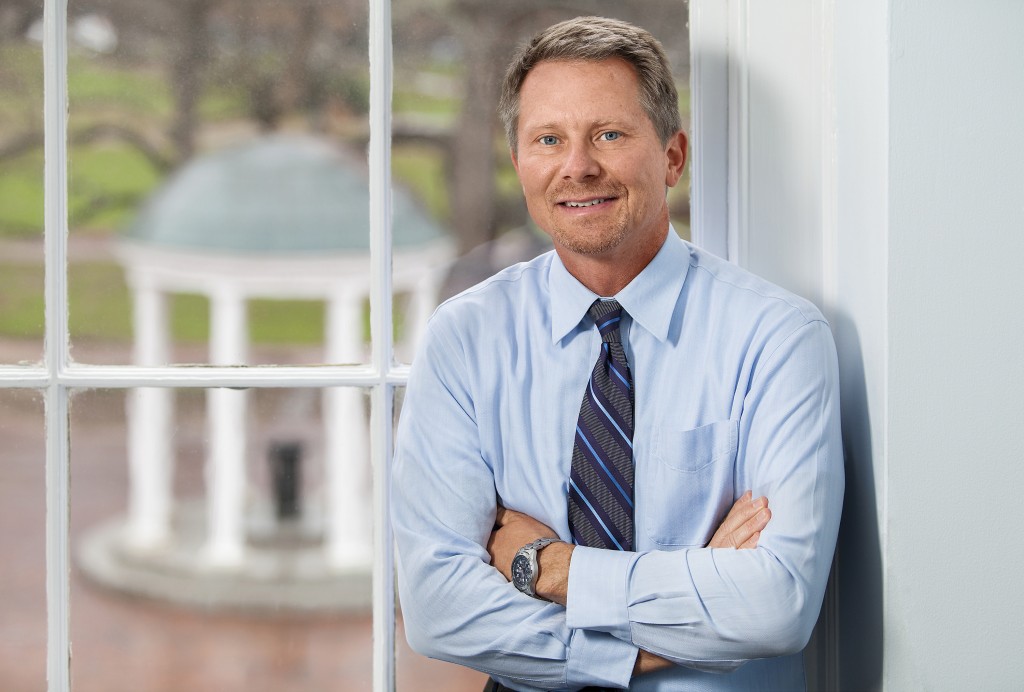 “Be strategic, bold and student focused” is Dean Kevin M. Guskiewicz’s plan for the College in broad strokes. (Photo by Kevin Seifert Photography)

Call Kevin Guskiewicz the shirtsleeves dean — with all the literal and figurative associations the term evokes.

He has occasionally been known to borrow a sports jacket from colleagues when an unexpected request for a TV interview surfaces and he’s dressed a little too casually for the camera. The neuroscientist is one of the world’s leading experts on concussions, and the media regularly come calling for a sit-down or a sound bite.

And he has quickly established himself as a let’s-roll-up-our-shirtsleeves-and-get-going leader, throwing himself into his work since taking office on Jan. 1. He has spent his first few months as dean visiting academic departments on what he calls a “listening tour” and to share his ambitious agenda. 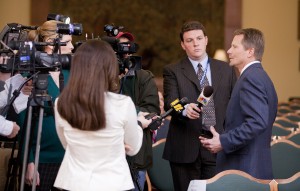 Guskiewicz is no stranger to national media coverage. (Photo by Kevin Seifert Photography)

Reduced to one sentence, that agenda is to be strategic, bold and student focused.

“Being strategic” means using a hypothesis-driven approach to establish the brands that distinguish Carolina from its peers. “Being bold” means encouraging outside-the-box ideas, such as the way the school has pioneered high-structure active learning techniques to reinvent the classroom experience. Being “student focused” means remembering that although UNC-Chapel Hill is one of the world’s great research universities, educating students is the College’s No. 1 responsibility.

“We have a 220-year history and embrace our rich traditions, but at the same time we need to be a forward-thinking College of Arts and Sciences,” said Guskiewicz. “We need to be providing our students with a liberal arts education that provides both breadth and depth so that they are the leading idea generators, data synthesizers and effective communicators of the next generation.”

Before being named Dean Karen Gil’s successor late last fall, Guskiewicz had served as senior associate dean for natural sciences since 2013. A 20-plus year faculty member of Carolina, he is the Kenan Distinguished Professor of Exercise and Sport Science and a former chair of that department.

In 2011, he was awarded a prestigious MacArthur Fellowship — commonly referred to as a “Genius” award — for his innovative work on the diagnosis, treatment and prevention of sport-related concussions. In 2013, Time magazine named him a Game Changer, one of 18 “innovators and problem-solvers that are inspiring change in America.” 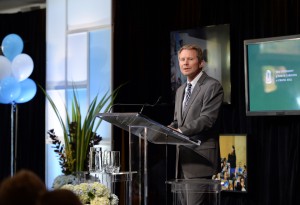 At the dean announcement ceremony in October. (Photo by UNC Communications)

Those who have worked with him over the years paint him as driven, focused, humble and a high achiever who effectively balances work and family life. (He and his wife, Amy, have four children.)

“He taught me to be visionary, and that while logistics are important, the 30,000-foot view is very valuable — not to let obstacles get in the way of achieving your objectives,” said Jason Mihalik, assistant professor of exercise and sport science and co-director of the Matthew Gfeller Sport-Related Traumatic Brain Injury Research Center, which Guskiewicz founded in 2009.

Guskiewicz is continuing his concussion research as dean and remains co-director of the Gfeller center.

“You think you’ve got it all figured out and Kevin will ask you a question and give you a whole new perspective,” said Rob Lynall, a Ph.D. student in the Human Movement Science curriculum who is being advised by Guskiewicz. “He has high expectations and leads by example.”

Mark Katz, director of the Institute for the Arts and Humanities in the College, describes Guskiewicz’s leadership style as “bold and thoughtful. He’s unafraid to dream big and has ambitions for the College. But his ambitions are guided by his consultations with a broad array of stakeholders. 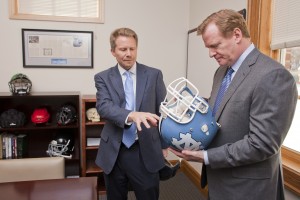 “At a time when so much attention and funding is given to STEM disciplines, it’s refreshing to see a scientist who understands the value of humanities scholarship and creative work in art, drama and music.”

One of Guskiewicz’s first acts as dean was to create a Dean’s Faculty Diversity Advisory Committee. Its mission is to provide advice on all matters of diversity and inclusiveness and help him develop a five-year plan for key initiatives.

“I think this committee will be an important way to get faculty input into the College’s plans for issues of diversity, equity and inclusion,” said Kia Caldwell, director of faculty diversity initiatives in the College. “Dean Karen Gil initiated important work around diversity several years ago, and it’s something that we need to continue to talk about and take action on in the College.”

Caldwell served on the search committee that interviewed the dean candidates and recommended Guskiewicz, who was among five finalists for the position, to Chancellor Carol L. Folt. “I appreciate Kevin’s proactive and creative approach to problem solving. He’s willing to think outside of the box.”