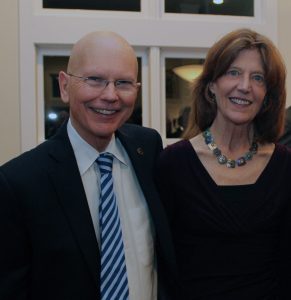 Hill Hall’s auditorium will be renovated and named after James and Susan Moeser. Hill Hall houses the music department.

James Moeser served as the University’s chancellor from 2000 to 2008 and is a renowned organ recitalist, church musician and teacher. Susan Moeser is the University Organist and is a lecturer in the department of music.

The new name will be the “James and Susan Moeser Auditorium.”

Renovations to the 550-seat auditorium and rotunda are expected to begin in 2015 and take two years to complete. Upgrades will include a climate control system, a state-of-the-art acoustical treatment, a professional grade stage, and a piano and equipment lift.

Total cost of the renovations is $15 million, with one-third coming from the William R. Kenan Charitable Trust, which launched the project; one-third from the Office of the Provost; and one-third from a special fundraising campaign managed by the Arts and Sciences Foundation. None of the money is coming from state-appropriated funds.