Lucy Russell, a sophomore and public policy major interning for a U.S. senator, said she was drawn to the UNC Honors Seminar program because it combined practical classroom instruction with immersive experiences.

“There’s a saying around here: If you want to understand this town, read the tax code.”

That’s how John Scott opens his lecture, “Budget and Taxes Part 1.” The town — you guessed it — is the nation’s capital, and Scott, a UNC research associate professor based in Washington, is standing in front of a PowerPoint in a large seminar room, 27 students listening attentively.

The large glass windows in the fifth-floor room lack a view of the iconic white marble buildings recognizable from movies and television, but no matter. The students in the UNC Honors Seminar on Public Policy and Global Affairs already know them well. They are working at internships in the U.S. House and Senate and Cabinet-level agencies. They are working at nonprofits and think tanks, associations and research centers.

They are mastering the Metro system, deciphering policy-speak, soaking up the fabulous and free museums, blanching at the prices of D.C. restaurants.

“Nothing compares to actually being in the center of the nation’s policy hub,” said Karla Guadalupe Garcia, a senior and public policy major interning at the White House Initiative on Educational Excellence for Hispanics. “From our coworkers to our neighbors, everyone is doing important and meaningful work.” Ying He, seated, confers with co-worker Meg VanDeusen at Feedback Labs, a consortium of nonprofits that helps make governments, NGOs and donors more responsive to their constituents. This was the sophomore public policy major’s first visit to Washington—“as an international student, I wanted to enrich my U.S. experience by having an internship.”

For 15 weeks every spring, students in the program spend four days a week at prestigious internships in the city’s corridors of power. Thursday is their day in the classroom. Mornings are spent taking a seminar led by Scott, UNC public policy chair Dan Gitterman, or other faculty affiliated with the program. Afternoon seminars are usually with a guest speaker and are often at the speaker’s place of work. Site visits this semester have included visits to the Pentagon, Politico and the Institute of Peace.

Scott’s Week Two class on tax code had a ripped-from-the-headlines air; less than a month before, Congress had passed the largest tax reform package in more than 30 years. After wrestling with such questions as What is a tax? Why do we have taxes? How do taxes function as ideological tools?, the students headed off to a working lunch at Burson Cohn & Wolfe, a global public relations and communications firm. Later in the day, they visited the offices of Pew Charitable Trusts, where Scott directs Pew’s retirement savings project, to chat with two recent UNC graduates who work at the nonprofit. The internship program in D.C. dates back to the late ’90s, said Gitterman, who has overseen the program as faculty director since 2011. The Honors Seminar on Public Policy and Global Affairs is open to anyone with a 3.0 GPA, not just Honors Carolina students, and earns 14 credit hours for the semester. Students from all majors can apply, although the preponderance, not surprisingly, are from public policy, political science and global studies.

“It’s a fairly competitive application process. We’ve tried to meet increasing demand by taking more and more students, but about 30 is as large as we can go,” said Gitterman. He would love for public policy to be able to offer a fall internship program in addition to the spring one to accommodate more students.

The program has ongoing relationships with many internship sites (some through UNC alumni connections), but students research the internships and apply on their own. The assignments must be approved in advance, and the internship hosts must pledge to engage students in substantive policy-related work. 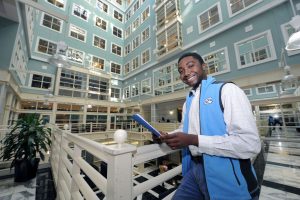 Andrew Brennan interned at the Obama Foundation. “Every day I am surrounded by folks who have already moved on from jobs and careers that I have only dreamed of,” said the junior political science major.

Elisa Moore, a junior majoring in global studies and French, has conducted primary source research in the National Archives and prepped her boss (former Ambassador Norm Eisen) for major media appearances during her internship at the Brookings Institution. She said one aspect of the program she hadn’t appreciated in advance was “how much access we would get to certain things just based on the kindness of UNC alumni. … I’m very excited each week to see who is coming to speak to us or who we get to go meet.”

Mary Katherine Falgout, a junior majoring in public policy with a minor in social and economic justice, is interning at the National Women’s Law Center. “I am working on child care policy advocacy. Some of my tasks include writing blogs, drafting tweets and reporting daily on talk of child care in the media,” she said. She envisions law school in her future and appreciates the opportunity to work with public interest lawyers.

Five of the 27 interns this semester have jobs on the Hill in Senate or House offices. Julia Herring, interning for Rep. Lois Frankel (D-Florida), has attended briefings and hearings, written memos and recommendations, and fielded phone calls from influential individuals.

“I really enjoy the balance of accountability, enthusiasm and liberty in this program,” said the sophomore majoring in political science and history. “While the real world is much more challenging than I ever imagined, the learning experience is far more rewarding as well.”

Working four days a week in an office gives students a taste of what life after graduation is like — but it doesn’t exempt them from course work. There are extensive readings, plus regular assignments — drafting op-eds, speeches and policy briefs, for example — for students to develop their research, writing and presentation skills.

To support the students, many of whom have never spent an extended period in a major city, Gitterman has developed a mentor system. All interns are assigned to one of four recent UNC alumni who went through the program themselves and now work in the capital. The mentors hold dinners and regular check-ins with the students, who stay in a dorm-style residence in the city. A night out at a pizzeria in D.C.’s Adams Morgan neighborhood.

There are also some formal social and cultural activities built in, including an evening at the Kennedy Center for the Performing Arts. A weekend excursion to New York City in April will provide this year’s group of interns the opportunity to meet Volcker Alliance President (and former UNC System President) Tom Ross, New York Times columnist Frank Bruni and Bloomberg LP chairman Peter Grauer (all are UNC undergraduate or law school alumni) and take in a Broadway show.

Asked to reflect on her early impression of the internship, sophomore and Senate intern Lucy Russell replied, “This has been the most unique experience of my Carolina journey so far. … I have been exposed to new career paths, have met fellow Tar Heels with a passion for public service, and have reaffirmed my gut feeling that I can be an agent of change in D.C. and beyond. … [UNC alumni] are always willing to offer life guidance, career support or just a listening ear. It is incredible how passionate they are for supporting their alma mater, and it makes me very grateful to be at UNC.”