Dana Coen, director of UNC’s Writing for the Screen and Stage minor in the department of communication, brings extensive professional experience as a playwright and screenwriter to the classroom. Before arriving at Carolina in 2009, Coen spent over 35 years in New York and Hollywood. He wrote and directed numerous plays prior to serving as co-executive producer of the CBS series JAG for eight seasons. 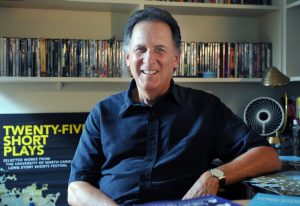 Dana Coen, director of the Writing for the Screen and Stage program, says a new book featuring former students’ one-act plays gives readers “an opportunity to visit the minds of young creatives” at UNC.

Q: What is The Long Story Shorts One-Act Festival, and what inspired you to create it?

A: A few years after joining the program, I altered the introductory course so that students wrote a short play and a short screenplay. When I read the f

irst set of short plays, I thought, “I need to do something with these.”  So I started imagining a way that students could develop the work in collaboration with professionals, seasoned actors and directors. The festival is a celebration of their work. One-act plays allow playwrights to address big topics in economical ways. It’s a great way to start them off.

Q: What was your goal in pulling together these plays into a book?

A: I want the world to know that college-age students are capable of good writing as long as there’s supervision. This book provides a living example that young writers can produce work of value.

Q: Why should a general audience read this book?

Q: What have some of the student playwrights gone on to do?

A: One graduate turned an internship on the TV series The Flash into a produced episode. She was only two years out of the program. Another is running the L.A. office of a well-known production company. One of our playwrights has had two of his plays produced Off-Broadway. A graduate was a staff writer for Haven on the Syfy channel for a number of years.

Q: Tell us about this year’s festival.

A: One of the plays is written entirely in iambic pentameter. Another is simply two mismatched characters in a car.  It’s hilarious. And then there’s one in which a father and son work out their relationship in a game of poker. These are just three examples of how different these plays can be. I’ve discovered if you challenge students to dig deeply about who they are and how they view their world, they will express themselves in fascinating ways.

Watch a video about the Writing for the Screen and Stage Program.

Actors who have performed in the plays featured in the book will do a series of readings at local bookstores this fall. Visit www.uncpress.org/author/dana-coen for more information.

This is just one example of the various works published every year by Carolina faculty and alumni; find more here!