A large-scale archaeological project on Crete has created an enduring collaboration, an experiential global learning opportunity for UNC students and a future heritage tourism site for the region. 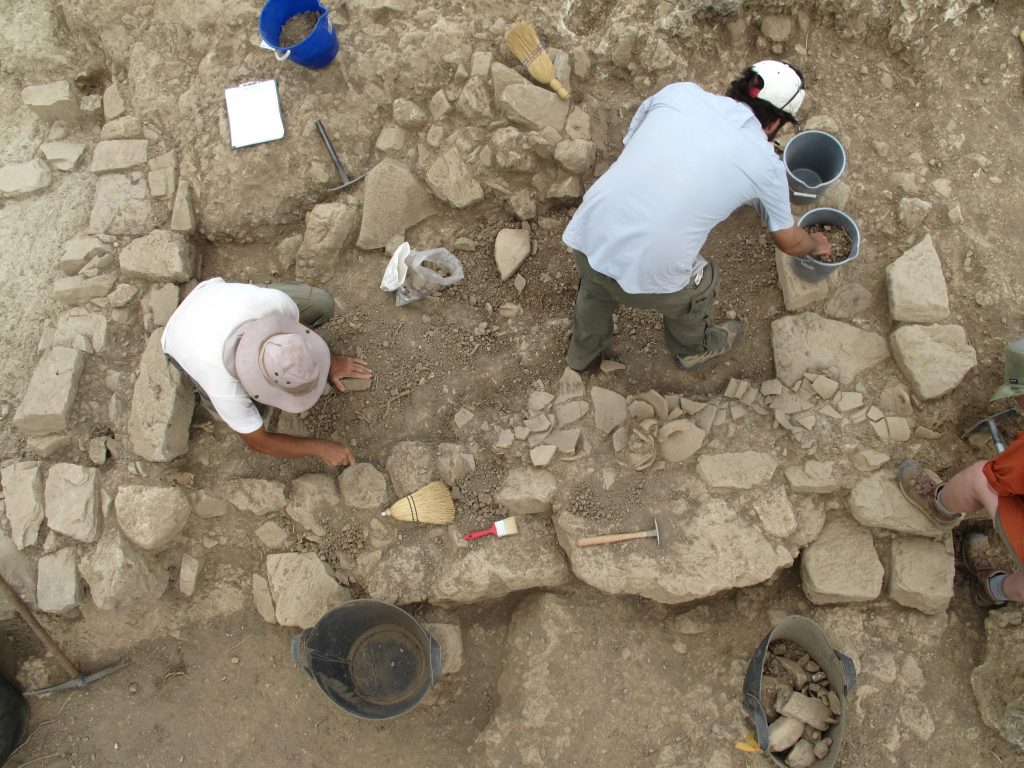 For 16 years, UNC researchers and students have led a large international archaeological team at Azoria, on the island of Crete. (photo by Donald Haggis)

Morning begins early, well before 6 a.m., in the small Greek village of Kavousi, on the island of Crete. Pickup trucks rumble up a winding road in the western Siteia mountains, passing by olive trees — one at least 1,500 years old — and wild flora to transport faculty and students to the top of a steep hill with a breathtaking view of Mirabello Bay below.

Their destination: Azoria, an archaeological site where UNC researchers and students have led a large international, interdisciplinary team for 16 years. Their goal has been to excavate and study the sociopolitical and economic structure of an emerging city in its transition from the Early Iron Age to the Archaic periods (7th to 5th centuries B.C.). It is the first example of an early Greek urban center recovered from Crete — and perhaps the best documented in the Aegean. 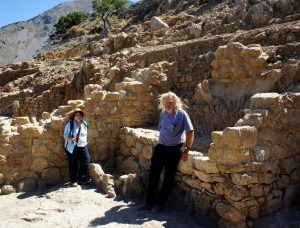 Professors Margaret Scarry and Donald Haggis take a break in an archaic (6th c. B.C.) storeroom of the West Building at Azoria. (Photo by J. Martini)

It’s hot, dirty, messy and important work, and it’s been the long-term passion of Donald Haggis, the Nicholas A. Cassas Term Professor of Greek Studies in UNC’s department of classics. He established the Azoria Project in 2001 under the auspices of the American School of Classical Studies at Athens. Early on, he brought in UNC archaeobotanist Margaret Scarry to the project. She’s an expert in plant remains and the current chair of the curriculum in archaeology and director of the Research Laboratories of Archaeology (RLA). That move would prove to be fortuitous, given what they would find over the years about the importance of food and communal dining to the city’s civic life. Another key partner is Margaret Mook of Iowa State University, Azoria’s pottery specialist.

Summer 2017 marked the last season of excavation for Azoria, which will be followed by five years of study and analysis. It’s also a time for reflection on the monumental scale of the project — which has raised over $1.8 million in competitive grants (including funds from the National Endowment for the Humanities and National Science Foundation), trained over 300 undergraduate and graduate students, and resulted in the publication of 35 articles and book chapters and 80 papers. 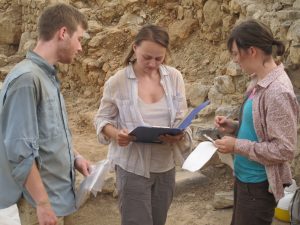 “This multidisciplinary approach has resulted in a dynamic, intellectual cross-fertilization of fields — bridging departmental divides that sometimes separate the humanities, social and natural sciences,” Haggis said.

Many of the UNC students who have worked at Azoria say it has been among the most formative experiences of their academic careers.

Azoria quite frankly changed his life, said Tucker Watkins King, who spent three seasons on Crete and also worked with the RLA. He graduated in 2017 with majors in archaeology and anthropology and a minor in classical humanities. He plans to apply to graduate school.

“What I love about archaeology is that a little bit of curiosity can take you to amazing places,” he

said. “My participation in the Azoria Project has inspired me to do what I love and seek a career in archaeology. I would never have realized how much ‘playing in the dirt’ brings my life fulfillment.”

Food as the center of civic life 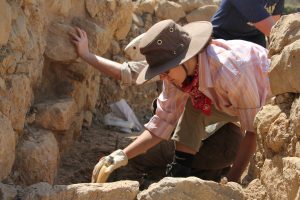 Archaeological work at Azoria has revealed buildings used for public functions and evidence of communal dining and large-scale feasting.

Archaeologists call the most prominent structure they have unearthed the Monumental Civic Building, a large hall lined with benches that could accommodate about 150 people. It would have been used for communal dining and public meetings, possibly functioning as an early council house. Connected to that building is a small shrine. Archaeologists have also uncovered what they call the Communal Dining Building, composed of suites of interconnected kitchens, storerooms and dining rooms, and — discovered this past summer — a large warehouse for storing food.  An exciting find is a beam olive press, which uses a lever and weights system and is the earliest known example in Greece.

“In the beginning, we envisioned quite a different character to the city,” Scarry said. “But over the course of the excavations, it became apparent that the site was focused around the use of food as the grease for the politics. I don’t know of any other place where we have quite this kind of configuration.” 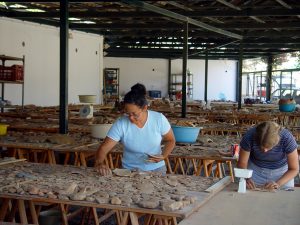 The sheer scale and size of Azoria is atypical, she noted. “The amount of earth we’ve moved in 10 excavation seasons is uncommon these days. At the end of the summer, we took some drone pictures of the site; it’s pretty stunning.”

The city was destroyed in a catastrophic fire at the beginning of the 5th century B.C.

A meaningful experience for students and faculty

Long before “experiential learning” became a buzzword, Azoria was providing that opportunity to students. Undergraduates spend eight- to 12-hour days working alongside faculty, graduate students and Greek residents. They live in local villages and learn to navigate the customs and culture of daily life. They work at the dig site and the Institute for Aegean Prehistory Study Center for East Crete in nearby Pacheia Ammos. There, they process archaeological findings — plant remains, animal bones and pottery. They must be adaptable and flexible, as each day unveils new surprises in the soil beneath their feet.

“Taking students into the field is perhaps the most gratifying teaching experience I have had in my 25 years as a university professor,” Haggis said. “It is essentially a sink-or-swim immersion in an intensive field situation.”

Here’s how some of the students characterize their experience:

“I have really flourished academically and socially here in Crete. Each day onsite is an amazing experience. It is exhilarating to be surrounded by centuries of history and people who contain such vast amounts of knowledge about this history,” said Andrianna Dallis (classical archaeology and psychology ’20, with a minor in neuroscience).

“My first season as a trench assistant with the project was a major turning point in my intellectual development. I was immediately captivated by the interpretative problems posed by field excavation and the satisfaction that came in the pursuit of greater understanding,” said Alex Griffin, (classical archaeology ’17), who will be entering the classics post-baccalaureate program at UNC this year. 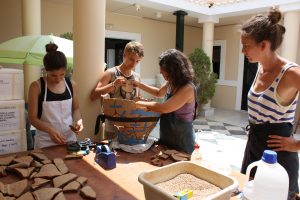 “Azoria has shaped the way that I conduct my research. As an undergraduate I quickly became interested in urban problems — how cities work, how communities function and why some communities thrive while others dissolve. Azoria provides the cornerstone for a lot of my thinking on these issues,” said Drew Cabaniss (classical archaeology ’15, with minors in geology and ancient Greek). He is now a Ph.D. candidate at the University of Michigan.

Azoria is also a significant public humanities project for the University, said Haggis. From the project’s inception, he and others have been committed to side-by-side excavation and conservation as well as sustainable cultural tourism.

An aerial view of the storerooms of the West Building at Azoria shows deposits of storage vessels. (Photo by D. Faulmann)

In 2012, Azoria won a Best Practices in Site Preservation Award from the Archaeological Institute of America for its focus on working with local specialists in stewardship of the site.

A new grant from the Stavros Niarchos Foundation will support the final stages of site conservation and public programming, with the long-term goal of creating an archaeological park that will provide a positive economic impact for the region.

“Our work has reached diverse and international non-academic audiences,” Haggis said. “We consider public education — local and global — to be the most important outcome of our work.”