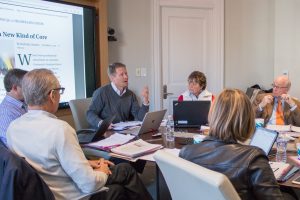 Dean Kevin Guskiewicz leads a discussion in a December meeting of the Think Tank, composed of alumni, entrepreneurs and community/business leaders. (photo by Kristen Chavez)

Creating a brain trust of strategic advisers was part of Kevin Guskiewicz’s plan even before he became dean in January 2016. He presented the idea of an advisory “think tank” as part of his formal pitch to the UNC selection committee for the job.

“There are plenty of smart people inside the College with great ideas about what it takes to rethink the modern-day liberal arts curriculum, but there is value to bringing in outside perspectives,” said Guskiewicz, who formed the group as one of his first acts as dean. “I believe the best ideas come when you approach a challenge from different viewpoints.”

The College Think Tank is composed of successful alumni, entrepreneurs and community/business leaders who advise Guskiewicz and his senior leadership team on pertinent issues. At a May meeting, the think tank weighed in on drafts of the College’s new mission, vision and values statements that were emerging from the dean’s strategic planning process.

In December, members took a deep dive into reimagining the general education curriculum. (The College is in the process of updating the curriculum — the first major overhaul in a decade — for students entering Carolina in fall 2019.) Topics discussed: How do we get faculty trained in old-school teaching methods to explore more contemporary high-structure active learning techniques? How long does a study abroad experience need to be for students to become immersed in another culture? How do we remove the barriers that prevent first-generation students from taking advantage of experiential learning opportunities like internships? 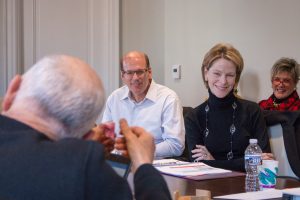 Think Tank members Jonathan Reckford and Julia Grumbles laugh at a comment; behind them is Terry Rhodes, senior associate dean for fine arts and humanities. (photo by Kristen Chavez)

“The data on first-generation students show that they have the academic knowledge but they don’t have the cultural capital,” Robyn Hadley, who oversees a support program for under-represented students at Washington University in St. Louis, told fellow think tank members. “They don’t know to go to the networking dinners, for example. Coming to college is almost like charting a new country.”

Ideas explored included: scholarships that go beyond covering basic expenses, since there are always hidden educational costs; offering required science courses at partner universities overseas to get more STEM majors to participate in study abroad; pairing low-income students with high-income students for an exchange of experiences.

As the daylong session wrapped up, Guskiewicz told the group, “One of the elements of our new values statement is to be ‘strategically bold,’ and you are one way we are doing this.”

Tom Uhlman (political science M.S. ’71, Ph.D. ’75), co-chair along with Guskiewicz, is founder and managing partner of New Venture Partners LLC, an early stage venture capital firm focused on corporate technology spinouts. He is a member of the College’s Foundation Board.

Frank Bruni (English ’86) is an op-ed columnist for The New York Times, the author of two bestselling books and a frequent commentator on television news shows.

Buck Goldstein (political science ’70, law ’76) is entrepreneur-in-residence and a professor of the practice at UNC-Chapel Hill. He is the co-author of Engines of Innovation: The Entrepreneurial University in the Twenty-First Century. He is also chairman of Medfusion, a medical information technology company.

Julia Grumbles (history ’75) is the retired corporate vice president of human resources, public relations and corporate marketing resources at Turner Broadcasting System. She currently serves on the UNC-Chapel Hill Board of Trustees and the board of UNC’s Institute for the Arts and Humanities.

Robyn S. Hadley (public policy analysis ’85) is associate vice chancellor and dean of the John B. Ervin Scholars Program, which aims to provide opportunities for under-represented students at Washington University in St. Louis.

Sallie Krawcheck (journalism/political science ’87) is the CEO and co-founder of Ellevest, a digital adviser for women. She is also owner and chair of Ellevate Network, a global professional women’s network.

David W. McLaughlin is provost emeritus of New York University. He supports the scholarly development of faculty and students in mathematics, sciences and technology. His son, Rich McLaughlin, is the chair of the mathematics department in UNC’s College of Arts & Sciences.

Jonathan Reckford (political science ’84) is CEO of Habitat for Humanity. Previously, he served as president of stores for the Musicland division of Best Buy, senior vice president of corporate planning and communications for Circuit City and director of strategic planning at the Walt Disney Co.

Edward Strong is a founding partner of Dodger Theatricals Ltd., a theatrical production company. Dodger has produced more than 150 productions worldwide, which collectively have won more than 50 Tony Awards. He recently joined the UNC faculty as an entrepreneur-in-residence.

Travis Tygart (philosophy ’93) has been the CEO of the U.S. Anti-Doping Agency since 2007. He has been recognized by Sports Illustrated as one of the 50 Most Powerful People in Sports and named to the Time 100 list of most influential people in the world for 2013.

Cassandra Butts ’91, an original member of the Think Tank, died in 2016. She had served as White House counsel under President Obama.