A great idea, without a target market and investors, remains just an idea, tucked away in someone’s mind.

A competition offered annually by the biomedical engineering program, a joint department between UNC and NC State, helps students transform those ideas into real-world applications, with advice from experts in business, law and manufacturing.

Called i4 (with the four “I’s” being identification, ideation, innovation and implementation), the competition encourages participants to emerge from the process with a patent or marketable product they can turn into a business or license to an existing company.

Shawn Gomez, an associate professor in the department, runs the i4 contest, now in its second year and open to all BME undergraduates. 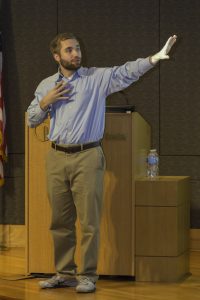 Evan Lineberger of team D-Nerve presents on his team’s proposed device used in renal denervation — a technique being explored by physicians as a method for controlling drug-resistant chronic hypertension. (photo by Devin Hubbard)

“We coach students and connect them with entrepreneurial resources that help them better identify and define unmet clinical needs as well as teach them how to communicate their ideas,” Gomez said. “Every team has a faculty adviser and an industry adviser. We bring in new judges each year, either from industry or with entrepreneurial expertise, and students can network with them beyond the competition.”

The i4 contestants appear before a panel of judges that determines which teams move on to two rounds of competition before the final six teams are selected to compete in April. The first-, second- and third-place winners will receive $15,000, $10,000 and $5,000, respectively, to further develop their ideas and secure intellectual property rights. The competition is supported with private gifts from an anonymous donor.

Alexander Brown, part of a team of 10 juniors, estimates that each member of his team has devoted about eight hours a week to developing the group’s product, which alerts clinicians that a clot is about to form in a dialysis tube. A clot requires that the dialysis be stopped while the clinician replaces the tube, resulting in wasted time and money.

Brown’s team received $1,000 after the first round of pitches, but did not advance beyond the second round.

“We are still working with our faculty adviser to develop our device,” he said. “However, our proposed usage for the device has expanded outside of just clot detection in tubing during dialysis. The competition was a good experience for my team overall, and many of us are excited to compete again next year as seniors with our senior design projects.”

Melissa Serrano Burns’ team of five senior women advanced to the final round of competition. The team is working on a noninvasive way to detect human papillomavirus (HPV), a precursor to deadly cervical cancer. The device would be similar to a pregnancy urine test and could be used in developing countries because a sophisticated laboratory would not be needed to process the tests.

“The way the i4 competition is structured helps us along step by step in an environment that is not hostile,” Serrano Burns said. “They’re here to help us develop our ideas, which is kind of rare.”

Gomez has been impressed by the variety of medical conundrums the i4 teams have taken on, and that participants are creating products that will help people. Last year’s i4 competition winners developed a device that helps physicians address a common side effect of Crohn’s disease; a more efficient wound irrigation device; and a prototype for a bipolar electrocautery tool, used in neurosurgery.

“These are real solutions to real problems,” he said.