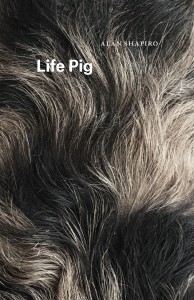 Life Pig (The University of Chicago Press, Oct. 10, 2016) by Alan Shapiro, Kenan Professor of English. Shapiro’s newest book of poetry is situated at the intersection between private and public history, as well as individual life and the collective life of middle-class America in the 20th and 21st centuries. Whether writing about an aged and dying parent or remembering incidents from childhood and adolescence, Shapiro attends to the world in ways that are as deeply personal as they are recognizable and freshly social — both timeless and utterly of this particular moment.

Necessary Noise: Music, Film and Charitable Imperialism in the East of Congo (Oxford University Press, Oct. 17, 2016) by Cherie Rivers Ndaliko, assistant professor of music. Since 1997, the war in the east of the Democratic Republic of the Congo has taken more than 6 million lives and shapes the daily existence of the nation’s residents. While Congo is often portrayed in international media as an unproductive failed state, the Congolese have turned increasingly to art-making to express their experience to external eyes. Rivers Ndaliko argues that cultural activism and the enthusiasm to produce art exists in Congo as a remedy for the social ills of war and as a way to communicate a positive vision of the country.

Lovie: The Story of a Southern Midwife and an Unlikely Friendship (University of North Carolina Press, December 2016) by Lisa Yarger (M.A. folklore 97). From 1950 until 2001, Lovie Beard Shelton practiced midwifery in eastern North Carolina homes, delivering some 4,000 babies to black, white, Mennonite and hippie women; to those too poor to afford a hospital birth; and to a few rich enough to have any kind of delivery they pleased. Her life was conspicuously marked by loss, including the untimely death of her husband and the murder of her son. Lovie is a provocative chronicle of Shelton’s life and work, which spanned enormous changes in midwifery and in the ways women give birth. 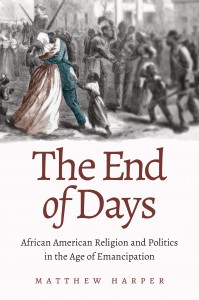 The End of Days: African American Religion and Politics in the Age of Emancipation (University of North Carolina Press, January 2017) by Matthew Harper (M.A. history ’03, Ph.D. history ’09.) For four million slaves, emancipation was a liberation and resurrection story of biblical proportion, both the clearest example of God’s intervention in human history and a sign of the end of days. In this book, Matthew Harper demonstrates how black southerners’ theology, in particular their understanding of the end times, influenced nearly every major economic and political decision they made in the aftermath of emancipation.

Calling the Shots: The President, Executive Orders and Public Policy. (Brookings Institution Press, Oct. 25, 2016) by Daniel P. Gitterman, Thomas Willis Lambeth Distinguished Professor and chair of public policy. The United States Constitution lays out three hypothetically equal branches of government — the executive, the legislative, and the judicial — but over the years, the president, as head of the executive branch, has emerged as the usually dominant political and administrative force at the federal level. In fact, Daniel Gitterman tells us, the president effectively is the CEO of an enormous federal bureaucracy.

Christianity, Social Justice, and the Japanese American Incarceration during World War II (University of North Carolina Press, November 2016) by Anne M. Blankenship (M.A. philosophy ’08, Ph.D. philosophy ’12 ). Blankenship’s study of Christianity in the infamous camps where Japanese Americans were incarcerated during World War II yields insights both far-reaching and timely. While most Japanese Americans maintained their traditional identities as Buddhists, a sizeable minority identified as Christian, and a number of church leaders sought to minister to them in the camps. Blankenship argues that the incarceration period introduced new social and legal approaches for Christians of all stripes to challenge the constitutionality of government policies on race and civil rights.

Invisible Subjects: Asian America in Postwar Literature (Oxford University Press) by Heidi Kim, associate professor of English and comparative literature. Invisible Subjects broadens the archive of Asian American studies, using advances in Asian American history and historiography to reinterpret the politics of the major figures of post-World War II American literature and criticism. She takes theoretical inspiration from the work of Ralph Ellison and his focus on the invisibility of a racial minority in mainstream history. The book offers an original, important and vital contribution to both our understanding of American literary history and the general study of race and ethnicity in American cultural history. 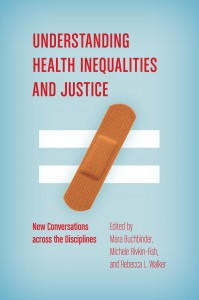 Understanding Health Inequalities and Justice: New Conversations across the Disciplines (University of North Carolina Press, November 2016) edited by Mara Buchbinder, assistant professor of social medicine and adjunct assistant professor of anthropology; Michele Rivkin-Fish, associate professor of anthropology; and Rebecca L. Walker, associate professor of social medicine and adjunct associate professor of philosophy. Amid ongoing debate about health care reform, the need for informed analyses of health policy is greater than ever. The 12 original essays in this volume show that common public debates routinely bypass complex ethical, sociocultural, historical and political questions about how we should address ideals of justice and equality in health care. Integrating perspectives from the humanities, social sciences, medicine and public health, the contributors illuminate the relationships between justice and health inequalities to complicate and enrich debates often dominated by simplistic narratives.

Disease and Discrimination: Poverty and Pestilence in Colonial Atlantic America (University Press of Florida) by Dale Hutchinson, professor of anthropology. Disease and discrimination are processes linked to class in the early American colonies. Hutchinson argues that most colonists, slaves, servants and nearby Native Americans suffered significant health risks due to their lower economic and social status. With examples ranging from indentured servitude in the Chesapeake to the housing and sewage systems of New York to the effects of conflict between European powers, Hutchinson posits that poverty and living conditions, more so than microbes, were often at the root of epidemics.

Equality on Trial: Gender and Rights in the Modern American Workplace (University of Pennsylvania Press) by Katherine Turk, assistant professor of history and adjunct assistant professor of women’s and gender studies. In 1964, as part of its landmark Civil Rights Act, Congress outlawed workplace discrimination on the basis of such personal attributes as sex, race and religion. This provision, known as Title VII, laid a new legal foundation for women’s rights at work. Synthesizing the histories of work, social movements and civil rights in the postwar United States, Equality on Trial recovers the range of protagonists whose struggles forged the contemporary meanings of feminism, fairness and labor rights.

Ducktown Smoke: The Fight over One of the South’s Greatest Environmental Disasters 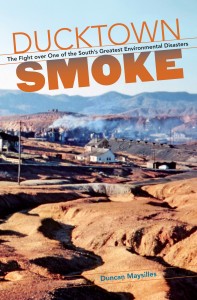 (University of North Carolina Press) by Duncan Maysilles (history undergraduate). After decades of copper mining, all that remained of the old hardwood forests in the Ducktown Mining District of the Southern Appalachian Mountains was a 50-square mile barren expanse of heavily gullied red hills — a landscape created by sulfur dioxide smoke from copper smelting and destructive logging practices. In Ducktown Smoke, Maysilles examines this environmental disaster, one of the worst the South has experienced, and its impact on environmental law and Appalachian conservation.

Magic in Islam (TarcherPerigee) by Michael Muhammad Knight, graduate student and teaching fellow, religious studies. Knight’s deeply original book fills a gap within existing literature on the place of magic in Islamic traditions and opens a new window on Islam for general readers and students of religion alike. In doing so, the book counters and complicates widespread perceptions of Islam, as well as of magic as it is practiced outside of European contexts. Magic in Islam also challenges our view of “organized religions” as clearly defined systems that can be reduced to checklists of key doctrines, texts and rules.

Ramon Griffero: Your Desires in Fragments and other plays (Oberon Books), translated by Adam Versenyi, chair of dramatic art and dramaturg for Play Makers Repertory Company. The first collection of plays in English from the influential and radical Chilean playwright and director, Ramon Griffero, whose plays from the late 1980s to the present have been essential components in the resurgence of contemporary Chilean theatre. Versenyi’s translations bring Griffero’s contributions to theater to the English-speaking-world for the first time. Having been forced to leave Chile at the time of the military coup in 1973, because of his radical political activities, Griffero returned in the early 1980s. As an openly gay former revolutionary, he founded the theater company Teatro del Fin de Siglo and ‘El Trolley’, a cultural space for resistance to the Pinochet dictatorship. 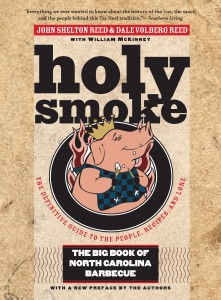 Holy Smoke: The Big Book of North Carolina Barbecue (University of North Carolina Press) by John Shelton Reed and Dale Volberg Reed. John Shelton Reed is the William Rand Kenan Jr. Professor of Sociology Emeritus. North Carolina is home to the longest continuous barbecue tradition on the North American mainland. Now available for the first time in paperback, Holy Smoke is a passionate exploration of the lore, recipes, traditions and people who have helped shape North Carolina’s signature slow-food dish. A new preface by the authors examines the latest news, good and bad, from the world of Tar Heel barbecue, and they offer an updated guide to relevant writing, films and websites.

The Edible South: The Power of Food and the Making of an American Region (University of North Carolina Press) by Marcie Cohen Ferris, professor of American studies. The experience of food serves as an evocative lens into colonial settlements and antebellum plantations, New South cities and Civil Rights-era lunch counters, chronic hunger and agricultural reform, counterculture communes and iconic restaurants. Ferris reveals how food — as cuisine and commodity — has expressed and shaped Southern identity to the present day. A 2014 Okra Summer Pick from the Southern Independent Booksellers Alliance and a 2016 Choice Outstanding Academic Title.

Pageants, Parlors, and Pretty Women: Race and Beauty in the Twentieth-Century South (University of North Carolina Press) by Blain Roberts (M.A. history ’00, Ph.D. history ’05). As Roberts shows in this incisive work, the pursuit of beauty in the South was linked to the tumultuous racial divides of the region, where the Jim Crow-era cosmetics industry came of age selling the idea of makeup that emphasized whiteness, and where, in the 1950s and 1960s, black-owned beauty shops served as crucial sites of resistance for civil rights activists. Roberts examines a range of beauty products, practices, and rituals — in settings that range from tobacco farms of the Great Depression to 1950s and ’60s college campuses.