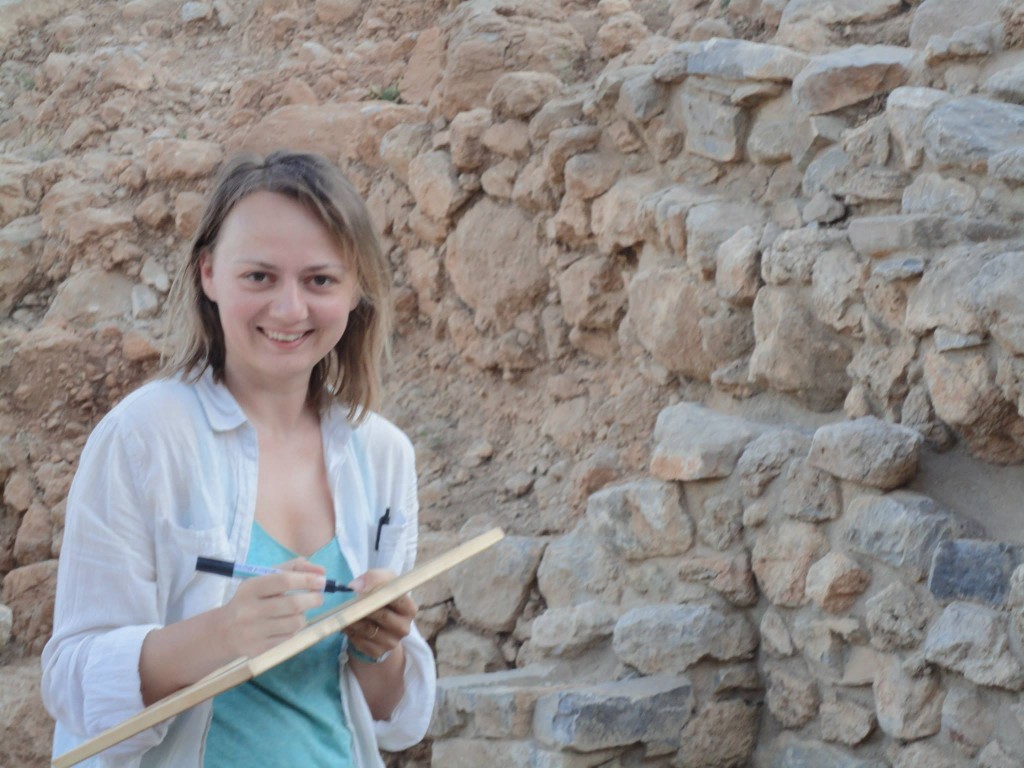 Cicek Beeby supervises UNC students during a dig at the Azoria site in Crete. She says they “love experiencing the thrill of discovery and gradually putting together clues to understand archaeological contexts.” (photo courtesy of Cicek Beeby)

Teaching is a dirty job — at least the way Cicek Beeby sometimes does it, standing at the bottom of a big hole showing her undergraduate students a freshly unearthed artifact from the Early Iron Age.

Beeby has been traveling to Crete every summer since 2012 to work as a trench supervisor on the Azoria Project, an excavation led by one of her mentors, Donald Haggis, Nicholas A. Cassas Term Professor of Greek Studies. Her research is in burial customs of ancient Greece.

The Ph.D. student and teaching assistant in classics was recognized with a 2016 Tanner Award for Excellence in Undergraduate Teaching. Many of those who nominated Beeby praised not only her ability to present complex ideas in easily understandable terms in large lecture classes but her adeptness in recognizing “teachable moments” during archaeological digs.

“When we came across an unusual deposit in our trench, Cicek would call us all over and ask what we thought was going on,” said Mallory Melton ’14, who is now studying anthropology at the University of California, Santa Barbara. “[We] became students in a classroom of her own creation, in which discovery, detailed explanation and hands-on learning were paramount.”

Students participate in all stages of the Azoria Project, from excavation in the field to processing plant remains, animal bones and pottery in the laboratory. 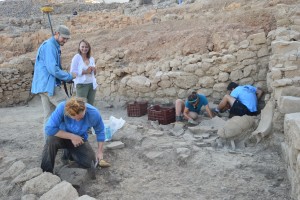 Students participate in all stages of the Azoria Project, from excavation in the field to processing plant remains, animal bones and pottery in the laboratory. (photo courtesy of Cicek Beeby)

“As a trench supervisor, I usually work with three to four student assistants in the field, guiding them through all aspects of digging and record-keeping at an archaeological site,” Beeby said. “Students love experiencing the thrill of discovery and gradually putting together clues — pottery, soil layers, architecture, plant and animal remains — to understand archaeological contexts. It’s like putting together a story one word at a time. It is crucial training for archaeology majors and a unique hands-on experience for students outside the field.”

Beeby, a native of Turkey, came to UNC from Florida State University, where she earned a master’s in classical archaeology. She received some pedagogical training at FSU, but Beeby thinks she has learned most by observing other teachers. “I have been extremely lucky to have been the teaching assistant of some excellent professors in our classics department,” she said. “I picked up little tricks-of-the-trade from each.”

Janet Downie, assistant professor of classics, observed Beeby teaching “Ancient Cities,” an introductory-level class. “I was so impressed by her engagement with the material, her ease in the classroom, her sense of presence and her rapport with the students in this large lecture class that I immediately thought that her success with the course was worthy of recognition,” Downie wrote to the nomination committee.

“We often talk of the valuable role our graduate students play in advancing the work of our renowned faculty, and certainly they are making important research contributions on their own. But we don’t talk nearly enough about what an excellent job our graduate students do in the classroom, educating our undergraduates with skill and passion,” said Kevin M. Guskiewicz, dean of the College. “The Tanner Awards shine a light on our emerging stars.”

Beeby will return to Greece this spring to do more research for her dissertation. She hopes to continue teaching after she receives her Ph.D. The most important thing her students have taught her, she said, is “to look at things with a fresh and unbiased mind.”

Note: In addition to Beeby, two other graduate teaching assistants in the College were recognized with 2016 Tanner Awards for Excellence in Undergraduate Teaching: Noah Greifer in the department of psychology and neuroscience and Jonathan Foland in the department of communication.