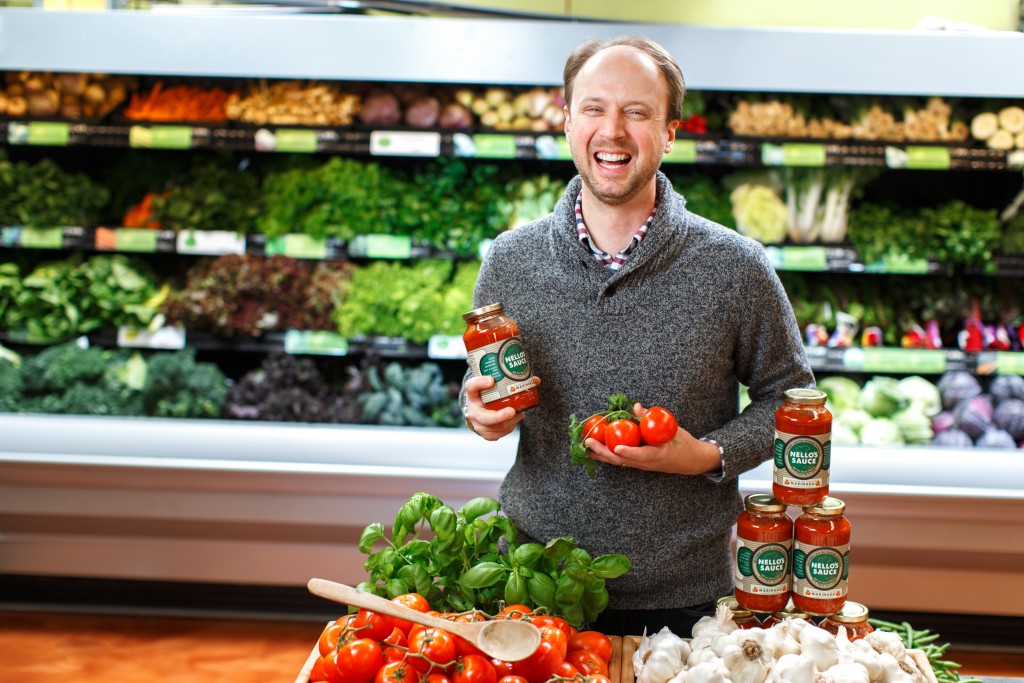 When you taste a spoonful of Nello’s premium tomato sauce, Neal McTighe wants you to be transported to his Italian great-grandmother Angelina’s kitchen, where she prepared her beloved “gravy” for family members so often that she “wore out the linoleum in front of the stove.”

It’s more than just a “soulless jar of sauce;” it’s about the story in the jar.

McTighe’s own story involves a nontraditional path toward becoming a successful entrepreneur. Armed with a Ph.D. in 2007 from UNC and a dissertation on Italian Renaissance philosopher Giordano Bruno, he had set his path on academia. He was good at teaching and enjoyed it. But the economy was tanking, job openings at universities were tight, and he ended up taking a job at Duke University Press in book publishing.

Sitting behind a desk, not using his Italian at all.

“I thought, ‘What do I really love about Italy?’ It was the people and the food and the history,” McTighe said, as he remembered developing a love for Italy during a study abroad trip to Bologna during his undergraduate days. “All I really had was a canvas in my mind — and that gave me a chance to reinvent myself.”

He started out with a website and a Facebook page, writing about Italian food and travel in a “really authentic way because I was using my ability to understand the language and to vet sources and to do research because I had that skillset from my education.”

McTighe began to dig deep into his family background, realizing he had a genuine product he could sell and a captive online audience.

Investing $150 in his efforts, he started out making sauce in his kitchen, sanitizing jars in the dishwasher and producing labels at a local printer. In 2011, Nello’s Sauce (so named because his Italian friends call him “Nello”) was available in 20 stores. Today it’s manufactured at a facility in North Carolina, sold online and shipped out by the tractor-trailer load to about 700 retail locations nationwide. On each jar of sauce, there’s a brief tribute to his great-grandmother.

How is this connected to his dissertation on Bruno? To McTighe, who laughingly admitted he didn’t approach starting a business like an MBA graduate would, it’s all perfectly logical.

He took courses on German philosophy, the history of science, Dante, Italian food and culture, and that’s where he learned to think through some complicated topics.

“The humanities teach expansiveness of thought,” he told a Gettysburg College audience a couple of years ago. “Having the intellectual freedom to explore and expand my mind allowed me to envision, to create a business. To see a broad picture. To see connections.”

Nello’s Sauce has great press in publications from Southern Living to The New York Times. He sources his field-grown, vine-ripened tomatoes for the sauce from a cooperative of U.S. farmers. It’s gluten-free, vegan-friendly, with no added sugar. In summer 2015, in a partnership with a local grower and Whole Foods, he created a limited-release specialty product, the first U.S.-grown, U.S.-made, certified biodynamic tomato sauce.

But going back to that idea of story — McTighe wanted Nello’s to do something beyond just becoming a successful business. As a child, he recalled serving Thanksgiving meals to the homeless at a local street center alongside his father. Through a partnership he calls “Our Hearts Beat Hunger,” Nello’s Sauce supports the Food Bank of Central and Eastern North Carolina. He hopes to see Nello’s contributions to the Food Bank grow from hundreds of jars of sauce a year to thousands.

And the heart of a teacher still lives within McTighe, who advises students today to “be inquisitive and develop a thirst for knowledge.”

“It’s all about adaptability,” he said. “I tell students to do both: Major in the humanities and a pre-professional program. Study history as a minor. You’ll enrich your soul.”