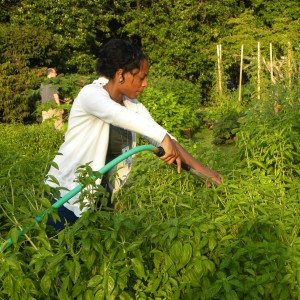 Riana Lynn in the Kitchen Garden of the White House, where she interned. (Photo courtesy of Riana Lynn)

Food tech entrepreneur Riana Lynn ’08 has chalked up more high-powered experiences at age 30 than most people accumulate in a lifetime.

Since graduating from UNC’s College of Arts and Sciences, she has founded three startups, managed high-profile projects at the White House and secured a coveted spot as a Google-Code2040 entrepreneur-in-residence.

Lynn is now negotiating the sale of her third food-related venture — FoodTrace, a software platform and suite of services for food suppliers — and planning the launch of a fourth.

The net result of her breathless past decade? A laser focus on what she cares about most deeply — creating impact, transforming the nation’s food system and changing the face of the nation’s tech community.

“I really just want to continue to build, to try to impact my community and get more minority entrepreneurs doing well,” she said.

Lynn grew up in Evanston, Ill., but North Carolina schools were always on her radar, due in large measure to Michael Jordan and N.C. college sports.

“I was just a nerdy little girl who loved basketball and science,” she said.

UNC’s track coaches recruited her to Chapel Hill, where she excelled in discus, javelin and shotput, ranking at that time among the top 10 female discus throwers in university history.

Lynn initially jumped on the pre-med track, pursuing a biology major and chemistry minor. But she took an elective class on the Harlem Renaissance taught by professor Kenneth Janken that proved so transformative she added African, African American and diaspora studies as a second major.

“I learned that tons of entrepreneurs were bred out of the Harlem Renaissance,” Lynn recalled. “I was fascinated by that. I was really interested in figuring out how to bridge my passions with my beliefs.”

Lynn attended graduate school at Northwestern University, where she earned a master’s degree in public policy and administration. While there, she co-founded a food company, built outreach websites on minority-targeted health and human services programs, and conducted research on nutrigenomics — the study of how people respond to nutrients based on their genetic makeup. She also spent five months as a White House intern, supporting initiatives for women, girls, jobs and small business. 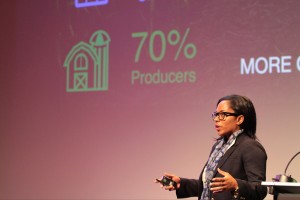 Since graduating from UNC, Lynn has founded three startups, managed high profile projects at the White House and secured a spot as a Google-CODE2040 entrepreneur-in-residence. (Photo courtesy of Riana Lynn)

“I realized, you can be a scientific researcher or you can be a policymaker, but it’s really the entrepreneurs that get things moving along the fastest,” she said.

The CODE2040 Residency program aims to increase the number of minorities in the tech community by helping minority entrepreneurs take their companies to the next level and cultivate diversity in their own communities. So Lynn has spent the past year developing FoodTrace while helping diversify the talent, network and entrepreneurial ecosystem in Chicago.

As she pushes FoodTrace into a larger market through an acquisition, she is already developing her next food venture.

She also serves on the Dean’s Working Group for the Minor in Entrepreneurship, where she is lending her knowledge to support the next generation of UNC entrepreneurs.

“If you go to a great university like Carolina, you can tap into its many resources and develop a set of skills you can apply to your personal brand, and you can continue to find a new marker of success year after year.”