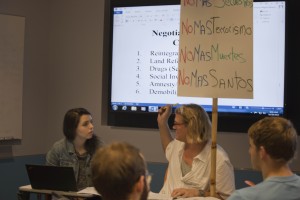 The University of North Carolina at Chapel Hill is celebrating the 100th anniversary of Latin American studies on campus during the 2015-16 academic year.

“This is a remarkable anniversary,” says Jonathan Hartlyn, senior associate dean for social sciences and global programs in the UNC College of Arts and Sciences and a scholar of Latin American political science. “It helps explain why Carolina has long been at the forefront of Latin American scholarship—helping the university build extensive and deep relations with universities and colleagues in the United States and throughout Latin America.”

In conjunction with the anniversary, the UNC Institute for the Study of the Americas published One Hundred Years of Latin American Studies at the University of North Carolina at Chapel Hill, 1915-2015, prepared by the institute’s Director Louis A. Pérez and Associate Director Beatriz Riefkohl Muñiz. The book examines the history of Latin American courses and curricula at the University and offers tribute to leaders who have supported the area of study.

The first course with Latin American content at UNC was introduced in 1915. Professor William W. Pierson offered “Spanish-American History” in what was then the Department of History and Government. In conjunction with the course, Pierson published a syllabus on Latin American history, which—for a mere 25 cents—provided one of the earliest guides to an area of study for which there were very few English-language textbooks or survey histories.

In the following decades, the Latin American studies curriculum gradually expanded, with additional offerings in history, government, Romance languages, geology and geography. By the 1940s, the expansion of U.S. activity with Latin America —ranging from trade and commerce to leisure travel—was reflected in the increase in activity at UNC as well.

By this time, undergraduate and graduate education in Latin American studies began taking its current shape, with both levels of study approached in an interdisciplinary manner and influenced by the complexities of the history of the region. 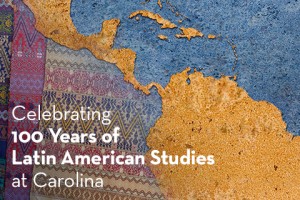 Carolina also saw a rapid growth in incoming students from Latin America. The establishment of the Inter-American Institute in 1940, in cooperation with the University of San Marcos in Lima, Peru, created a program offering English-language training at UNC. The program was developed by an early advocate for Latin American studies at UNC and in the United States, Professor Sturgis Leavitt, who collaborated with Víctor Andrés Belaúnde Terry, director of the summer school in Lima, to create the program. The inaugural class brought 108 students to UNC from seven Latin American countries in 1941.

“It was a time of remarkable progress at UNC,” says Pérez, who notes that Leavitt’s contributions ensured that UNC was truly “of the two Americas.”

Latin American studies continued to expand over the years, with content included in courses in political science, anthropology, city and regional planning and economics. This growth occurred even despite the challenges that the 1950s brought, with a deepening of hostility toward the U.S. throughout the region in the post-war years.

UNC developed new initiatives, such as a 1960s Department of State-sponsored exchange program that brought 15 Cuban students to campus at a time of deep estrangement between Cuba and the United States. This, and other similar activity, continued to put UNC’s Latin American programs at the forefront of international activity throughout the Americas.

The programs and activities that Leavitt began were further strengthened by Federico G. Gil, a Cuban-born UNC scholar on Latin American governments—Chile in particular—and on Latin American-United States relations. Gil became director of the Institute for Latin American Studies, now the Institute for the Study of the Americas (ISA), in 1959 and served in this role until 1983. During his tenure, he was instrumental in the formation of the Latin American Studies Association (LASA), serving as a founding member and as president in 1971. Three additional UNC-Chapel Hill faculty members have also served as LASA president: Henry Landsberger, Lars Schoultz and Evelyne Huber.

Gil’s role in bringing forward Latin American scholarship throughout the U.S. is acknowledged in an award given each year by the Institute for the Study of the Americas. In recognition of Gil’s “receptivity to new ideas and approaches … especially his promotion of empirically based research,” the institute presents the Gil Award for the Best Undergraduate Honors Thesis written on a Latin American or Caribbean topic.

By the close of Gil’s tenure, there were 50 faculty members at UNC who devoted more than half their research and teaching to the study of Latin America. Today, there are more than 80. Many of their efforts are brought together through the Institute for the Study of the Americas, one of 20 National Resource Centers funded by the U.S. Department of Education to advance the study of Latin America.

The institute has been an integral part of the campus. Today, Latin American studies extends to a range of programs and initiatives, including the Latino Migration Project, the Yucatec Maya Summer Institute, Environmental Studies in the Galápagos, the Jewish Studies in Buenos Aires Summer Program, UNC in Costa Rica, and a many other community and campus programs, lectures and films.

The institute also offers funding for faculty and graduate and undergraduate activities, with $225,000 in fellowship and travel support available to enable students to pursue their research in Latin America—and has helped build UNC’s library collections, where there are now more than 388,000 volumes related to Latin America, including 265,000 volumes in Spanish and Portuguese.

The Institute for the Study of the Americas is also part of a consortium with Duke University, a collaboration first made possible by the Andrew W. Mellon Foundation in 1989 and fortified with the first National Resource Center award at UNC. U.S. Department of Education funding has been continuous since 1991 and has allowed the institute to continue expanding offerings.

Learn more about the institute at isa.unc.edu.