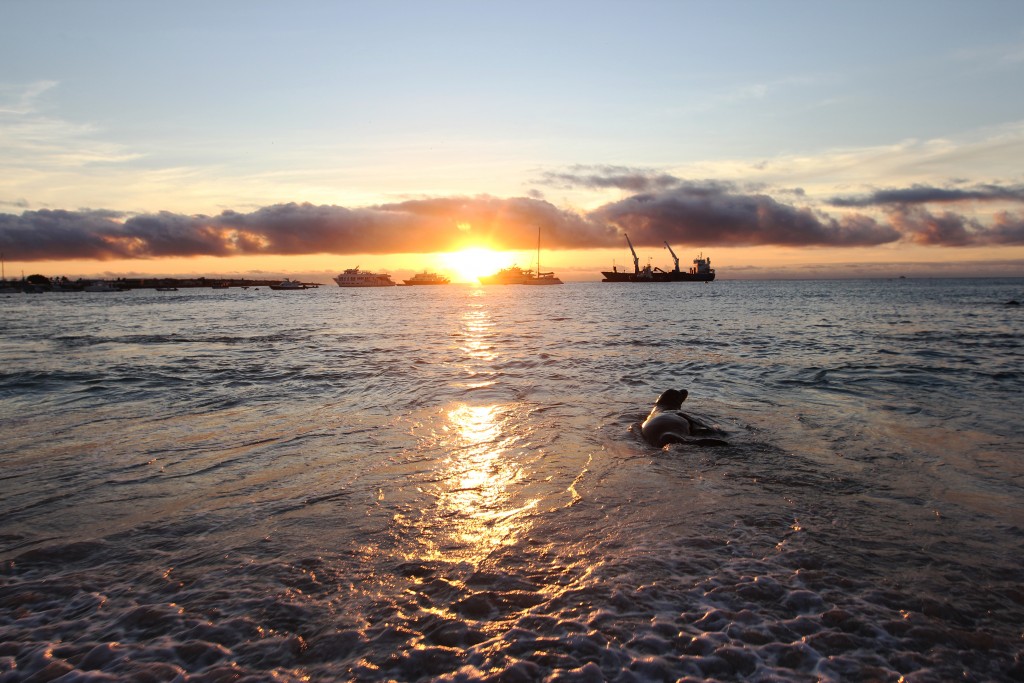 A sea lion lounges in the surf on Playa Mann as the sun sets over Puerto Baquerizo Moreno. This beach is just steps away from the Galapagos Science Center. (photo by Mark Lide Parker)

Three flights. A bus, a ferry, a pickup truck, a Zodiac boat, a ship, and now, on a 40-foot sport fisherman vessel, I’m cruising into the harbor of San Cristóbal Island as the sun dips down to the horizon. Welcome to the Galápagos.

Next to me is Steve Walsh, a geographer in the College of Arts and Sciences. “Right over there is Playa Mann,” he says, pointing to a picturesque sandy beach, flanked by lava rocks. “And see that building on the right? That’s GAIAS — the Galápagos Institute for the Arts and Sciences.”

“Yep,” I say, recognizing it instantly. “I’ve spent a lot of time there.” It’s been six years, but it all looks the same. The coral-colored building glows in the early evening light. A sandy cobblestone road separates the academic building from the beach where sea lions play in the surf and sunbathe on the lava rocks. Tourists and locals alike gather every evening to watch the sunset. A friendly man named Carlos runs a little hut where you can buy ice cream and cold beer for $2. 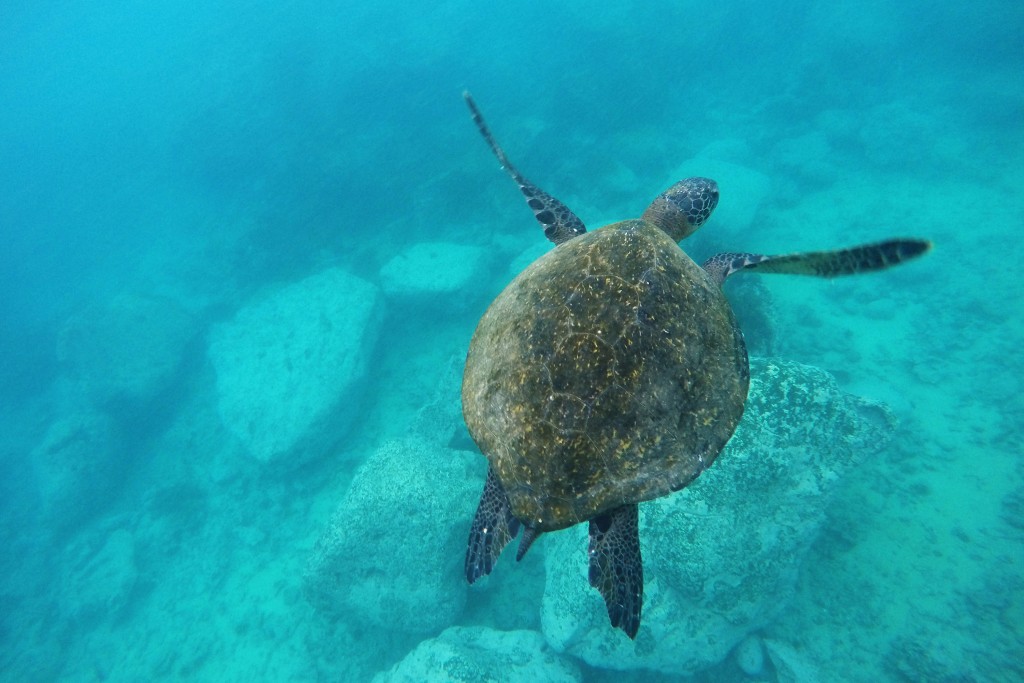 A Pacific green sea turtle swims in Darwin Bay, located a little over a mile from the Galapagos Science Center. (Photo by Mary Lide Parker)

“And that building to the right is the Galápagos Science Center,” Walsh says. There is a note of pride in his voice as he points to the gleaming facility — he is the co-director of the center.

The Galápagos Science Center, a collaboration between UNC-Chapel Hill and Universidad San Francisco de Quito, is the only thing I don’t recognize. Construction began in 2010, about a year after I was last here.

Our boat pulls up to the dock. I thank the crew members in Spanish, grab my duffel bag and backpack full of camera gear, and make my way to the boardwalk. I spot a fat sea lion asleep on one of the benches and smile at the familiar site. Here I am, at the edge of the earth, and it’s familiar.

In 2009, as a junior at Carolina, I traveled to the Galápagos Islands with a group of students from the UNC School of Media and Journalism — the inception of the Living Galápagos project. We spent a month on the islands, documenting the lives of people that live there. 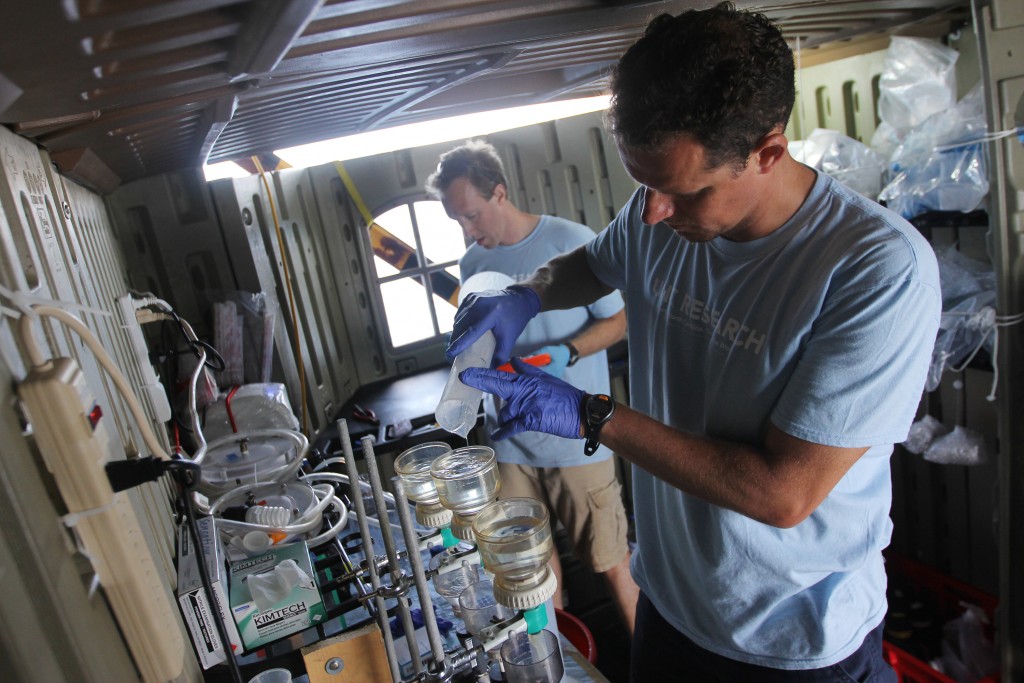 Now I’m back in the islands as a UNC communications specialist to film and photograph a research expedition with oceanographers from our department of marine sciences.

The opportunity to travel to a place like the Galápagos is special, but I feel particularly lucky that I’m here for work. I get to go behind the scenes — to film on a research vessel in the open ocean, to take photos on a remote island uninhabited by people, and to learn about the forces that influence our oceans, most notably El Niño.

Adrian Marchetti, a UNC oceanographer, explains how the effects of El Niño are felt most strongly in equatorial places. “These islands are really the front lines,” he says. “By figuring out the impact El Niño is having here, we can make predictions for how it will affect other parts of this world.”

At the end of the expedition, the researchers haul everything back to the Galápagos Science Center. They hose down their equipment and begin packing an entire marine science lab into containers that will fly with us back to Chapel Hill. 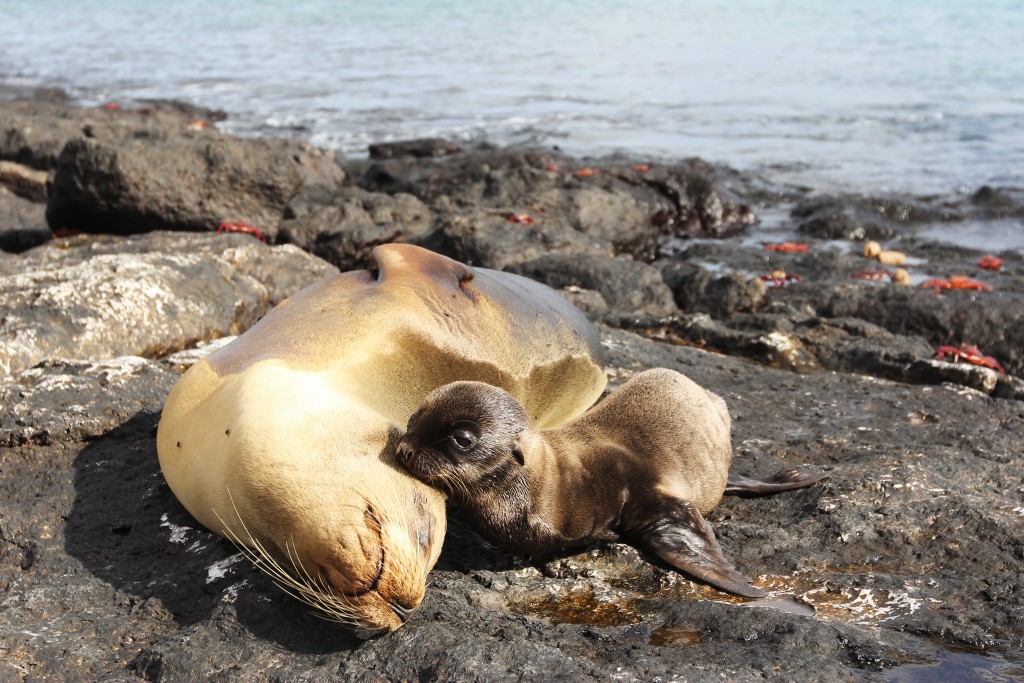 A baby sea lion cuddles with its mother on the rocks of Plaza Sur Island. Sea lions are one of the species adversely affected by the effects of El Niño. (Photo by Mary Lide Parker)

A short taxi ride, a flight, a ride in an old rusty pickup truck at the Guayaquil airport, a long flight, a drawn-out conversation with a customs agent in Miami, another flight, and finally we arrive at RDU, where a marine sciences grad student picks us up in a van to drive us back to campus.

I sit down in the van and briefly close my eyes. Despite being sunburned and sleep deprived, I am very happy. Documenting research in action is a great gig. 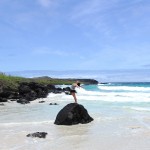 Essay and photos by Mary Lide Parker ’10, a former intern for the College of Arts and Sciences. Parker is a writer, videographer and photographer for UNC Research. She was able to put her Spanish to use in the Galapagos, thanks to a minor in Spanish for the Professions from the department of romance studies. Read more and watch a video about the Galapagos research expedition at endeavors.unc.edu.