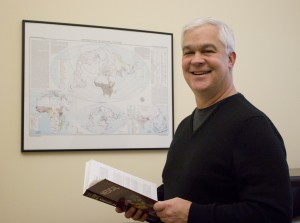 As an expert health geographer and spatial epidemiologist, Michael Emch creates amazing multilayered maps. But instead of depicting towns, roads, rivers and mountains, they show the complex human and environmental factors crowding the path to infectious disease in the developing world.

He discovers what variables are converging on the disease highway, so that public health policymakers and practitioners can make informed decisions about treating or preventing deadly illnesses.

Emch, professor and chair of geography in the College of Arts and Sciences, recalls when he first understood the power of maps for public health.

It was nearly three decades ago. As an undergraduate biology major at Alfred University in New York, Emch encountered a now-famous 1854 cholera map of London. The map, made by English physician John Snow, shows cholera cases clustering around a public water pump in Soho. When city officials closed the pump, the cholera outbreak decreased — groundbreaking evidence that the epidemic disease was borne by polluted water, not sooty air.

“I knew then what I wanted to do,” said Emch. He would combine his interest in biology and infectious disease prevention to map a creative interdisciplinary career.

He started by doing a modern version of Snow’s map for his Ph.D. in geography at Michigan State University, mapping cholera patterns and risk in rural Bangladesh.

At UNC since 2006, Emch collaborates with colleagues and students across health sciences and social sciences to collect information in the field as well as from giant data sets. Their work has contributed to new policies and practices for using cholera vaccines more effectively in Bangladesh and Haiti. Most recently, he has been helping to map malaria in Malawi.

He has mapped locations in the Democratic Republic of Congo, Nicaragua and many other places where infectious diseases have taken a human toll.

Emch also enjoys teaching undergraduate and graduate students about the power of mapping disease. He is the co-author of Health Geography, a major textbook in which he shares the Snow cholera map that first inspired him.