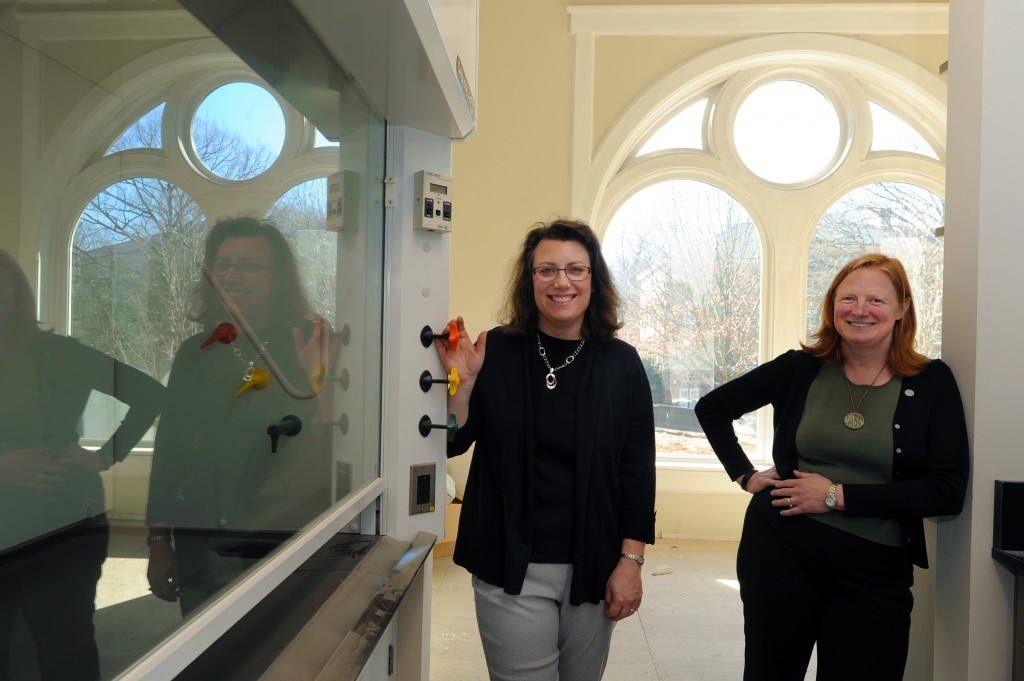 From left, Kelly Giovanello and Charlotte Boettiger will have lab space in the renovated Howell Hall. (Photo by Donn Young)

When people hear the word “psychology,” they may think of the father of psychoanalysis, Sigmund Freud, or a patient lying on a couch revealing his deepest fears and phobias. Donald Lysle, UNC psychology and neuroscience department chair, envisions this: Brain studies using leading-edge technology to help people understand the neurological processes underlying behaviors such as addiction and diseases such as Alzheimer’s or schizophrenia.

“To understand any disorder, you have to understand both the science of behaviors as well as the physical basis for those behaviors, the neurobiological underpinnings,” said Lysle, a Kenan Distinguished Professor. “One discipline informs the other, giving us the potential to find new neurologic mechanisms by which disorders develop and then to create novel treatments that we hadn’t previously considered.” 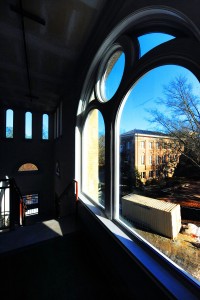 The name change to psychology and neuroscience and the new facilities in Howell Hall “reflect the diverse teaching and research in our department,” said chair Donald Lysle. (Photo by Donn Young)

In July 2015, the department formally changed its name to psychology and neuroscience and added a neuroscience minor to the College curriculum, with course offerings that integrate a number of disciplines, including biology, chemistry, mathematics, computer science, physics and biomedical engineering. Over 100 undergraduates already have declared the new minor, and the department’s next goal is to create a neuroscience major. At the graduate level, the department trains doctoral students in a wide array of neuroscientific techniques to address both basic and clinical translational research questions.

In summer 2016, the newly renovated Howell Hall will reopen across the courtyard from the department’s home in Davie Hall, outfitted with state-of-the-art laboratory space for pre-clinical studies, an interventional brain stimulation suite and other facilities that will allow further collaboration between the department, other units in the College and the UNC School of Medicine.

The name change and new facilities “reflect the diverse teaching and research in our department,” Lysle explained. “More than half of our current faculty engage in neuroscience research and receive neuroscience-specific funding.” In the past few years, clinical studies have been developed with the UNC Memory Clinic and the Bowles Center for Alcohol Studies, among others.

Associate professor Charlotte Boettiger’s training is in neuroscience and biology, not psychology. She studies alcoholism and drug addiction with a joint appointment in psychology and neuroscience and the Biomedical Research Imaging Center (BRIC). 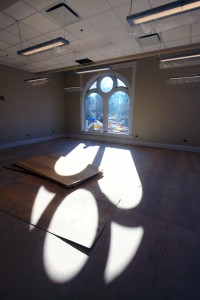 In addition to labs, the new light-filled, technology-enhanced Howell Hall will include facilities for behavioral observation studies. (Photo by Donn Young)

“I’m collaborating with clinicians to determine if we can find a biomarker indicating treatment recovery. We conduct brain-imaging studies of clinical trial patients before treatment begins and after treatment has been underway for several weeks. We can then determine what changes have occurred in their brain activity that may predict the ultimate treatment outcome.”

Howell Hall, originally built in 1906, previously housed UNC’s chemistry and journalism departments and its first school of pharmacy. In addition to labs, the new light-filled, technology-enhanced space will include facilities for behavioral observation studies.

Among the new equipment is a confocal microscope that provides two- and three-dimensional high resolution images to study proteins involved in conditions that include alcoholism, drug abuse and post-traumatic stress disorder. The open lab space will enhance recruitment of top graduate students and fellows.

Like Boettiger, associate professor Kelly Giovanello has a joint appointment with BRIC. Her research focuses on very early Alzheimer’s disease. The two faculty members will have new lab space in Howell Hall.

“We explore the cognitive and neural processes mediating memory in young adults and examine how these processes change with healthy aging and neurodegenerative disease,” Giovanello said.

Just as the Howell Hall renovations are being completed, the department is undertaking a feasibility study to renovate Davie Hall, its home since 1967.

“Psychology and neuroscience is really growing, and the University recognizes that,” Lysle said. “We want our facilities and our name change to mirror the greater interdisciplinary partnerships taking place among our faculty and programs.”