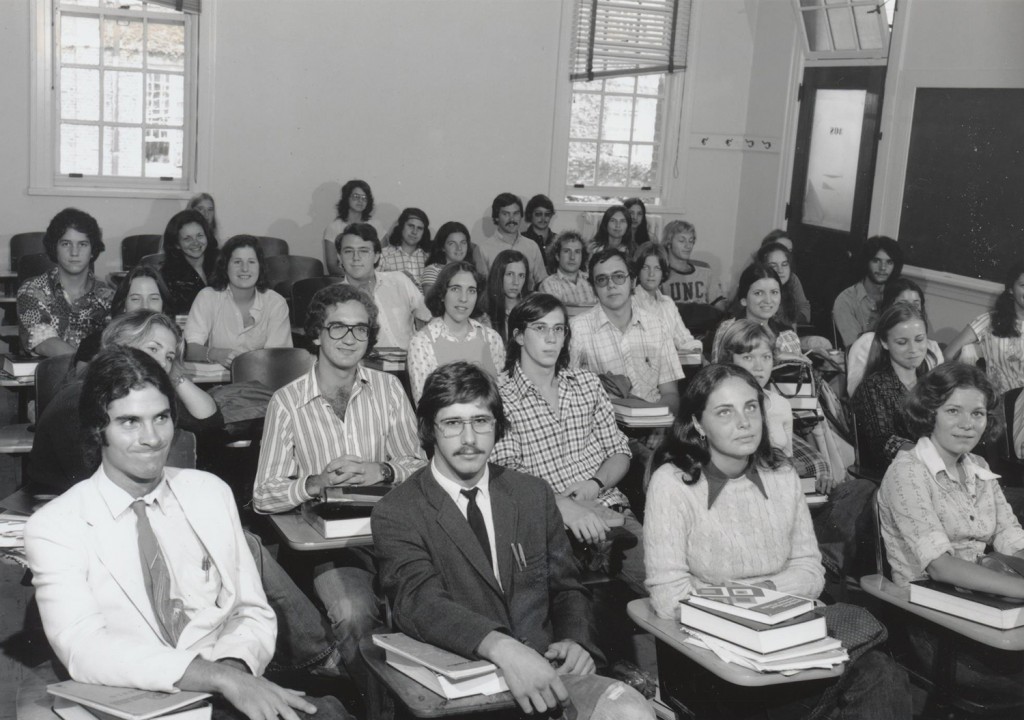 Readers responded with wonderful details about this photo labeled “Lectures before laptops,” featuring the late Father James Devereux’s 1975 English class, which we published in our spring ’15 issue. Multiple people identified the following alumni: On the front row, far left in the white jacket and tie, is Hillsborough, N.C. novelist David Payne ’77. On the second row, left, in the striped shirt and glasses is Raleigh lawyer John Russell ’77. Seated beside Russell in the checked shirt is UNC cardiologist David Tate ’77. Readers said they thought the class was located in either Greenlaw, Saunders (now Carolina) or Bingham halls. Vee Allen Waldrop ’76 believes she is “the dark-haired girl on the back row on the right.” She wrote: “Father Devereux was an enthusiastic teacher and quite stimulating. He had our class to his home for dinner that semester — an evening to remember.”

Read their detailed responses below and check out another historic photo we’d love your help with!

I graduated in August of ’75 so I’m not in that photo (although there is a kid that looks a bit like me). I took Renaissance Lit from Father Devereux in 1974 or ’75. My class was probably in Greenlaw but cannot say for sure. …

I loved my time in Chapel Hill. It was my first time away from home having transferred from the University of Northern Iowa, living at home with my parents in Waterloo, Iowa, and commuting back and forth to class each day. At some point I decided college was supposed to be more than that. I asked the advice of a professor from whom I had taken a course in Contemporary Southern Literature. Dr. McKean said, “Go to Chapel Hill, It’s a great school and there are lots of pretty girls there.” He had taught at NC State. That was the extent of my research. I went home that day and announced I was moving to Chapel Hill.

I remember rolling into town in August of 1972 in my brand new Ford Econoline van purchased for the trip, $500 down, $2,900 total. There were plywood walls in front of some stores on Franklin Street protecting pedestrians from construction and, of course, students had spray painted things on them, flowers and peace signs and the words “Apple Chill Fair.” I was instantly captivated. I would work for a year to establish residency. …

I worked as a laborer and carpenter’s helper for the Ranger Construction Co. adding five stories, the bed towers addition, to the hospital. … The first three weeks I lived in my van and showered after work in Old East. Pretty quick a student confronted me saying you don’t live here do you and invited me to his room for hot plate spaghetti. Through that meeting I met most of my close friends and who I rented an apartment with once I got in school. …

As figure head president of the Chapel Hill Friends of the Farm Workers, I met Cesar Chavez and Gloria Steinem.

What a great picture!

The class was English 58 — Shakespeare — and I think it was in Saunders Hall, which had larger rooms than most in Greenlaw. Father Devereux’s class was always over-subscribed, and he lectured pretty much non-stop through all the plays in one semester. If you were an English major, you had to take Shakespeare, and he gave the marquee class. …

I notice no air conditioning, and the windows cracked. Nobody is smoking either, which was unusual among English majors of the day. I think Father Devereux asked us not to in his class. Several years ago Prof. George Lensing told me that Father Devereux’s health was failing, and I wrote to him. He wrote me back the warmest note, remembering me and the class and just generally being chipper with a former student after thirty-plus years. …

Thanks for the great memory.

I’m from the class of ’58. I don’t know the students but certainly knew the professor! He was actually our pastor at St Peter’s Catholic Church in Charlotte. I knew he had taught at Carolina before his coming to Charlotte. He often offered classes on Shakespeare in the morning, but I was teaching pre-school and could never take any. He was my leader for the Jesuit Spiritual Exercises and was an outstanding person — Rev. James A. Devereux, born March 31, 1928; entered Society of Jesus (Jesuits) July 30, 1945; ordained a priest August 6, 1958; went to eternal life on Dec. 19, 2011. He also wrote a book of sermons, “A Gift of Faith Shared,” homilies given at St Peter’s between 1991-1995. …

I am a 1969 English graduate. James Devereux taught me Shakespeare. He was known to his students as Father Devereux, a Jesuit Priest. He was very popular with the students. His classes during my tenure at UNC were held in the auditorium in Bingham. Auditorium was full for every class. …

Thanks for a fond memory.

Regarding the picture “Lectures before laptops” on p.12 of the spring issue of Carolina Arts & Sciences, I am not in the picture, nor do I know what building this is, but I do know the two women in the front row. Left to right they are Nancy Geoghegan ’77 and Mae Mae Andrews ’77.

I took “God and the Novel” from Father Devereaux and enjoyed him thoroughly!  He was an enthusiastic teacher and quite stimulating. He had our class to his home for dinner that semester — an evening to remember. I was an English major. This class was one of my favorites. Yes, I remember $200 phone bills, talking to my boyfriend in another city. I remember correction tape and the horror of discovering an omission or error on your typewritten papers, causing one to have to re type the entire page! I was a terrible typist. I graduated in 1976.

The fellow beside me, to the right (I’m pictured on front row on the far left in white shirt and tie) is Carl Herndl. I can’t imagine why we were wearing ties. …

Check out the fall 2015 #Throwback photo.