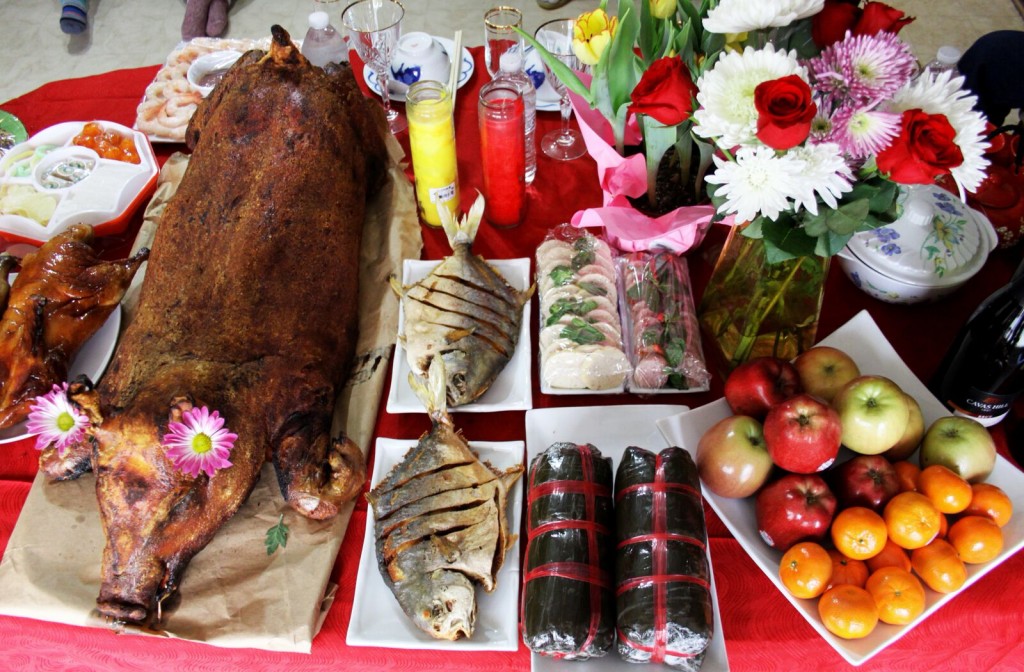 Food traditions are deeply important to the Phapphayboun family, as demonstrated by their celebration of Tết, or Vietnamese New Year. (photo by Katy Clune)

When Katy Clune arrived at Carolina for graduate folklore studies two years ago, she intended to weave together her interests in Southeast Asia and textiles. She had spent her childhood in Indonesia and worked most recently at the Textile Museum at George Washington University in Washington, D.C.

Once in Chapel Hill, she began seeking information about Southeast Asian culture in North Carolina, where Asian immigrants make up nearly 3 percent of the population. That’s how she met Toon Phapphayboun, whose family had fled harsh conditions in Laos during the aftermath of the Vietnam War. Phapphayboun quickly introduced Clune to the extended family, now happily re-settled in Morganton, N.C., where they own an Asian fusion restaurant and grocery popular with locals and immigrants alike. 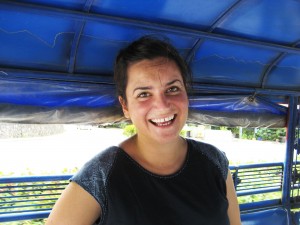 Clune’s friendship with the Phapphaybouns took her research in a new direction. Instead of textiles, she pursued the unexpected opportunity to deeply document an example of global foodways in the rural American South.

“Food is the sensory landscape of Laos,” Clune wrote in her May 2015 thesis for the M.A. in American studies/folklore. The Phapphaybouns have re-created their homeland within the bright yellow walls of Asian Fusion Kitchen, where the aroma of “garlic and the sweet smell of lemongrass” fill the dining area.

The spicy ingredients and sticky rice that held the family together during hard times in Laos have helped them assert their cultural identity — and make new friends — in the Blue Ridge foothills.

“It is the taste of Laos, played out in papaya salad and chilies,” that enabled the family “to exercise their heritage among one another, the local Lao community and other Morgantonians,” Clune wrote, “remaking Laos in the American South.” The restaurant blends global and local tastes, thanks to the cooking of Toon’s sister, Dara Phrakousonh. The menu fuses imported spices with fresh-grown Asian herbs and local produce from the farmers market.

Asian Fusion Kitchen, known to locals as AFK, is reaching beyond Southeast Asian immigrants. More than 75 percent of customers are non-Asian Southerners. The Lao beer on the AFK menu inspired a local brewery, Fonta Flora, to craft a special rice beer of its own. 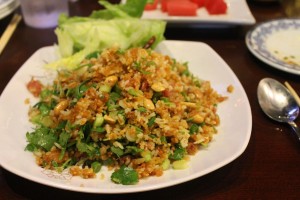 Nam khao is one of the most popular dishes at Asian Fusion Kitchen in Morganton, N.C. It combines dry stick rice with seasoned rice, fermented pork and seasonings. (photo by Katy Clune)

Clune was moved by the Phapphaybouns’ willingness to discuss their tragic past and welcome her into their new world. She learned that Toon’s father, a mayor in Laos, was assassinated when she was only 8 years old. Toon’s mother supported four children by selling home-cooked food. In 1980, when Toon was 14, she was the first in her family to flee communist-led Laos, canoeing and swimming across the Mekong River to a refugee camp in Thailand. Her mother later wed a doctor who had nearly died during six years in a “re-education” camp.

Toon made it to Los Angeles in 1981 and eventually helped her mother, stepfather and siblings emigrate. Now they live joyfully in a rural community where about 40 Lao families have settled.

Clune traveled to Morganton 10 times for family celebrations, Buddhist temple ceremonies and visits to the restaurant. She conducted interviews in North Carolina and Laos, and gathered more than 50 illustrations, including a museum image of a story cloth depicting Lao refugees crossing the Mekong.

Clune’s father, Daniel, became U.S. ambassador to Laos in 2013, providing an extra incentive for her to spend the summer of 2014 there, when some of the Phapphaybouns would also be visiting.

The irresistible aroma of cooking permeated the air in Vientiane, the capital, where “smoke rises from grilling fish, chicken and pork,” Clune wrote. “Green papayas hang on drooping branches, just steps from the kitchen and the mortar and pestle that will pound flavor into their flesh.” 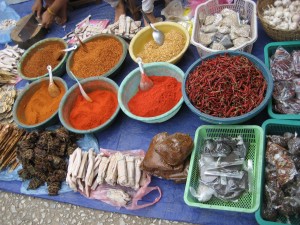 Clune’s thesis committee director was Bernard Herman, George B. Tindall Professor and chair of the American studies department, an expert on foodways. He called her thesis “an extraordinary work.”

“In my 40 years of teaching, this is clearly in the top five of theses I have directed or advised,” Herman said, citing the depth and sensitivity of her research and relationship with the family. “She really got at the humanity of the huge political, social and human dynamics and changes that are occurring, and how the family makes that visible through their restaurant.”

Clune’s writing about the Phapphaybouns will appear in Gravy, the Southern Foodways Alliance quarterly, and Southern Cultures, the journal of UNC’s Center for the Study of the American South. Read more at makinglaos.com and katyclune.com. Read Clune’s piece in Our State magazine.

Graduate students Katy Clune and Victoria Bouloubasis served as teaching assistants for the new food studies class, “Carolina Cooks, Carolina Eats,” co-taught in spring 2015 by American studies professors Sharon Holland and Marcie Cohen Ferris. Students documented the voices of local and global foodways across North Carolina, and are sharing their findings through a website and a forthcoming book of North Carolina foodways.