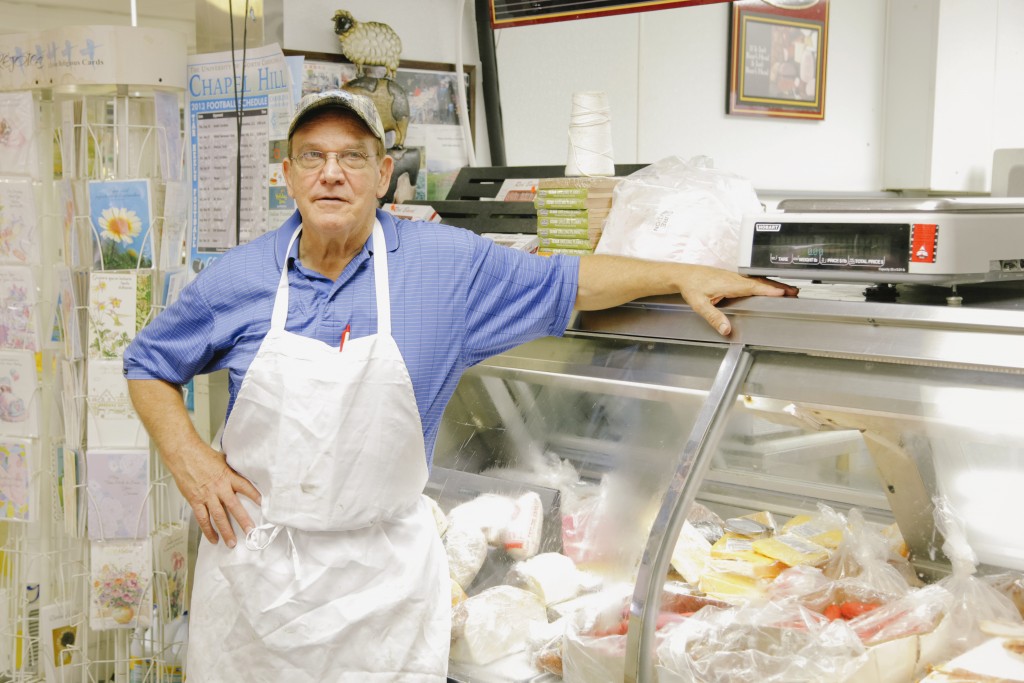 Cliff Collins of Cliff’s Meat Market in Carrboro is featured in a documentary by a UNC folklore graduate student. (photo by D.L. Anderson)

The butcher shop peels away a layer of the local food scene, revealing where global culture meets the American South. That’s what attracted Victoria Bouloubasis, a UNC folklore graduate student and seasoned food journalist, who grew up near Winston-Salem in a Greek immigrant restaurant family.

Bouloubasis and her partners at Vittles Films have captured the bilingual cacophony of Cliff’s in a 15-minute documentary produced for the Southern Foodways Alliance.

Un Buen Carnicero (A Good Butcher) stars Tolo Martinez, whom Collins hired 20 years ago to help serve an increasingly Hispanic clientele. Martinez and the other carniceros behind the counter emigrated from the state of Guanajuato in central Mexico. They’re among an estimated 8 million undocumented immigrants working in the shadows nationwide, according to a 2010 Pew Research survey. 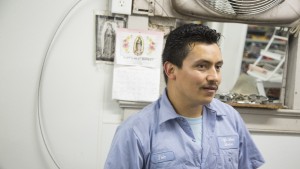 The film, a directorial debut for Bouloubasis, features English and Spanish dialogue, with subtitles and Mexican-flavored music. It premiered at Meredith College in Raleigh and has been screened at several other local venues, including the Lantern Restaurant in Chapel Hill (whose lead sous chef is also from Guanajuato) and two UNC food conferences. This past summer it also appeared in a PBS online film festival.

The documentary’s narrative takes place on July 3, 2014, the eve of Independence Day. Martinez is happily serving customers, while reflecting on the fears and frustrations simmering over his tenuous immigration status.

“There are good opportunities here in the United States,” Martinez says on camera, in Spanish. “But what we are doing is difficult because we have to do it with a lot of sacrifice. … It is a free country, but only at its convenience.”

Without legal residency, he can’t advance far in his work, and he can’t risk visiting Mexico, which he left as a teenager.

“I love this film,” said Marcie Cohen Ferris, UNC professor of American studies, an expert on Southern foodways, and Bouloubasis’ faculty adviser. “It’s poignant and provocative, and brings attention to defining issues in contemporary food cultures of the American South.”

Bouloubasis has been reporting on the local food scene for the past eight years. She is drawn to the stories of food workers in fields and kitchens, and consumers stuck in food deserts. Her work has appeared in INDY Week, The Guardian and The American Prospect. 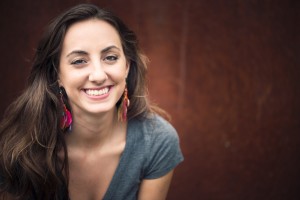 She and former INDY colleague photographer D.L. Anderson teamed up four years ago to form Vittles Films, with the tagline “Sustenance through Storytelling.” Their recent work has included Collards in the Cafeteria, about Gaston County Schools’ commitment to buy 10 percent of their food locally.

It’s not surprising that Bouloubasis enjoys exploring the cultural complexities of the food landscape. Her father is an immigrant who was raised in a small Greek village without indoor plumbing. He worked in the food industry his entire life, from kitchens in New York to his family’s restaurant in North Carolina.

“I grew up around food, and I’ve always loved cooking,” Bouloubasis said. “When I go to conferences, I seem to end up in the kitchen. I cook as soon as we finish editing film.”

She was the first in the family to earn a four-year college degree. She graduated from Carolina in 2005 with a double major in journalism and Spanish. She has been a bilingual copywriter and has worked on a farm in Portugal. She then combined her interest in writing and farming by serving as communications manager for RAFI (the Rural Advancement Foundation International), a farm advocacy and research organization based in Pittsboro, N.C.

For her folklore master’s thesis, she plans to explore issues of culture and identity among kitchen workers in North Carolina eateries.

“It’s a luxury to spend two years focusing on one subject,” she said of the graduate program. “It’s going to help me become a better storyteller with a deeper sense of the people behind our food culture.”

Graduate students Victoria Bouloubasis and Katy Clune served as teaching assistants for the new food studies class, “Carolina Cooks, Carolina Eats,” co-taught in spring 2015 by American studies professors Sharon Holland and Marcie Cohen Ferris. Students documented the voices of local and global foodways across North Carolina, and are sharing their findings through a website and a forthcoming book of North Carolina foodways.