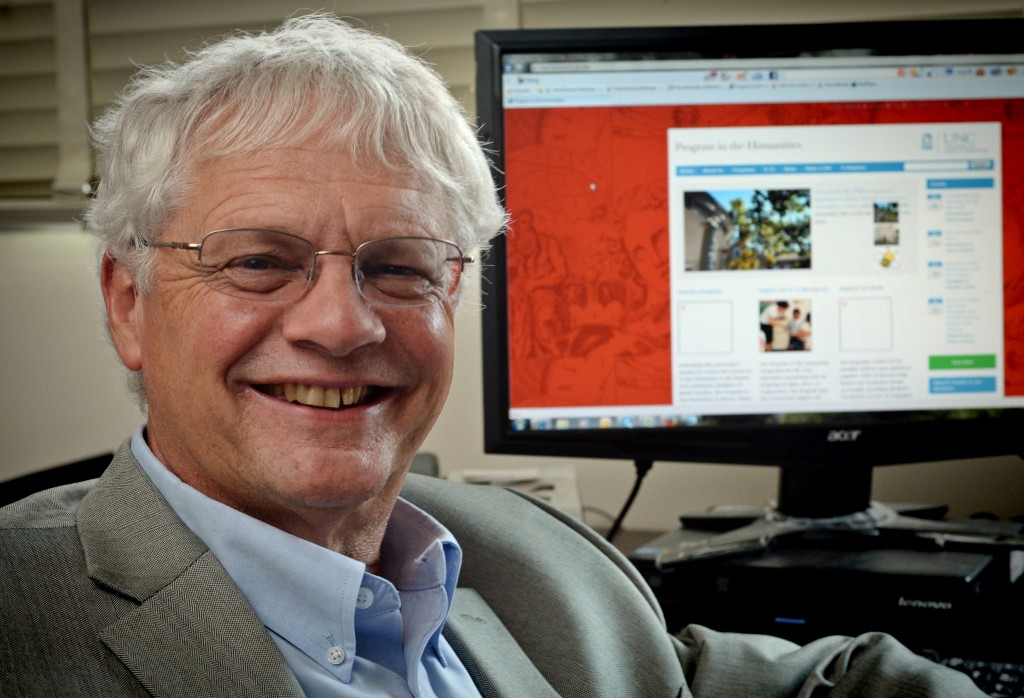 Historian Lloyd Kramer is the first faculty director of the program. (photo by Dan Sears)

Perhaps you’ve heard the perennial prognosis that the study of humanities is a dying field. Critics contend the curriculum is either too narrow (focusing on “dead white males”), too broad (expanding to embrace “multiculturalism”) or too irrelevant (learning for learning’s sake).

But these criticisms would spark lively debates among the thousands of lifelong learners of all ages and backgrounds who throng to seminars and special events sponsored year-round by the Program in the Humanities in UNC’s College of Arts and Sciences.

After 35 years, the humanities program is more popular, inventive and relevant than ever. During 2013-14, it reached nearly 3,000 adult learners, through weekend seminars as well as teacher-training workshops (see sidebar at the end of this story), shorter talks and activities in bookstores, museums and theaters, and, most recently, adult spelling bees and live game shows in nightclubs.

The humanities program provides a public face for Carolina and for often-misunderstood humanities scholarship.

“This is a great way for our faculty to reach out and serve the community and the state of North Carolina, as part of our essential mission as a public university,” said Lloyd Kramer, professor of European history, former history department chair and now the first tenured faculty director of UNC’s humanities program.

“We are conveying to the public that exploring the humanities in thoughtful ways helps us understand the meaning of life,” he said. “That’s how the humanities matter in today’s world, and that’s more important than ever.”

Kramer has been participating in the humanities seminars since joining the UNC faculty in 1986. 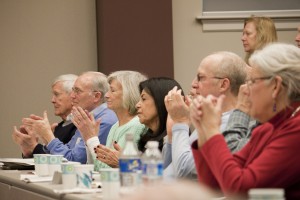 From its 1979 founding by the late UNC distinguished philosopher Maynard Adams, the humanities program has offered weekend seminars, “Adventures in Ideas.” Adams believed that public understanding of the humanities enhances knowledge that is essential to the functioning of a democratic society.

Today’s seminars continue to reflect and build on Adams’ vision by bringing together eager adult students and renowned scholars to explore important issues and interdisciplinary connections between the past and present.

Recent seminars have been especially timely. Last fall, humanities program participants explored “Elections, Politics, and Power Struggles from Ancient Rome to Modern North Carolina,” as the mid-term elections continued to shake up state politics. Another seminar dove into “Sports in America” when headlines were reporting on controversies in collegiate and national athletics.

In February, program participants explored “Latin America and the United States,” including a discussion on “Cuba in the American Imagination,” as President Obama sought to loosen travel restrictions to the island nation.

It’s no wonder that “Adventures in Ideas” seminars have attracted the Triangle’s growing population of retirees.

“After more than 25 years of parenting and working, we wanted to be able to fill in gaps in our understanding of the world outside of our work and family,” said Bob Jolls, who chairs the program’s external advisory board. He and his wife, Cecelia, have attended more than 100 program seminars since they retired to Chapel Hill in 1994. 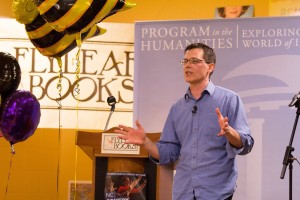 UNC faculty seem to enjoy the program’s seminars as much as the students do, said UNC historian Richard Talbert, who chairs the program’s faculty advisory committee.

“Most participants are well read, open-minded and impressively experienced in all kinds of spheres,” said Talbert, a popular seminar guest and a leading scholar of ancient world maps. “They are the kind of students that instructors want to engage with and be challenged by.”

Kramer wants to expand the program’s reach beyond the traditional seminar format to attract a more diverse audience. He and executive director Max Owre have broadened the scope and reach of the seminars by collaborating with Triangle theaters, museums, bookstores and comedy clubs.

The fall 2014 seminar “Small Treasures: Dutch and Flemish Art in the 16th and 17th Centuries” was held in Raleigh in collaboration with the N.C. Museum of Art’s exhibition of the small treasures of Rembrandt, Vermeer, Hals and their contemporaries. Speakers included UNC historians Kramer and Tatiana String, along with museum curator Dennis Weller. 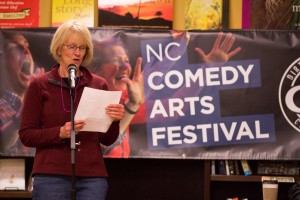 “Participants told us it opened their eyes to the connections between history and art,” said Kramer.

The bookstore also is co-hosting the “Spotlight on Scholars” series, showcasing one professor each week, such as American studies scholar John Kasson discussing his recent book on Shirley Temple. In addition, Flyleaf co-sponsors a weekly Great Books Reading Group, which kicked off the series with The Sun Also Rises with UNC’s eminent Hemingway scholar, Joseph Flora.

Most recently, the humanities program launched “NightLabs” — a series of lively educational game shows in “nontraditional settings,” i.e. local nightclubs. The $6 admission price is cheaper than going to a movie. 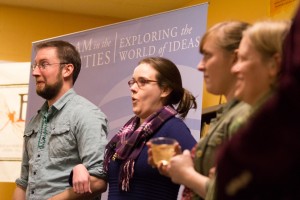 Can you spell ‘drogue’ and ‘torsion’? Those were some of the words spelling bee participants faced. (photo by Kevin Patrick Robbins)

The series is being emceed by program executive director Owre, a rock guitarist-turned-French historian, with comedians at DSI Comedy Club on West Franklin Street in Chapel Hill.

On a freezing night in February, the Adult Spelling Bee (no, it’s not X-rated) drew more than a dozen contestants cheered on by a mixed crowd of college students, young and mid-career professionals, and retirees. While spellers struggled onstage with unfamiliar words such as purser, drogue, torsion and noumenon, comedians Kit FitzSimons and Grace Carnes (dressed like a bumble bee) wisecracked and provided word derivations and patter.

The winner was Aaron Beyerlein, a Research Triangle Park biotech professional who managed to spell the words “impuissance” and “chiliasm” (Greek for 1,000 years). He said he was pleased to atone for his fourth-grade spelling bee loss (when he flubbed “interesting”).

Also on tap is a new quiz show, “Oh the Humanities,” featuring Carolina faculty “in compromising positions,” according to the program website. The format, akin to NPR’s Wait Wait … Don’t Tell Me!, pairs UNC scholars with DSI comedians. The March show featured associate professor of art Cary Levine and associate professor of media and technology studies Sarah Sharma. They were asked to provide “amazing facts” about their research, to introduce “a person or thing” they study and let comedians ask 20 yes/no questions about it, and to describe a “villain or hero” in their specialty. They also participated in rapid “crossfire” questioning and had to identify a surprise “call-in guest.” 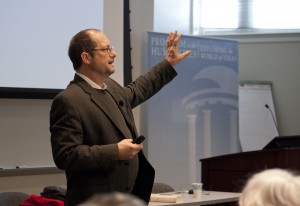 In April, the humanities program will unveil an ethics game show, Ask Rameses. (Picture “Dear Abby” crossed with Car Talk.) The inaugural show will star UNC distinguished philosopher and ethicist Susan Wolf, answering ethical dilemmas posed anonymously by audience members. According to the online program description, the format is designed to help observers “learn how a philosopher approaches life and comes away a better person.”

Just another example of how the Program in the Humanities is attracting thousands of fans who enjoy exploring intellectual ideas in their daily lives.

During 2014, nearly 300 teachers participated in consortium workshops with faculty from UNC and other universities. About one-third took part in the “Hidden Histories” workshops, which explored challenging topics not fully addressed in state textbooks, such as race and civil rights history.

Teachers returned to the classroom ready to share what they learned with the more than 40,000 students they teach per year, according to Christie Hinson Norris, consortium director and former Durham middle school teacher.

“I have been an educator for 28 years. … I don’t think I have ever attended [a workshop] that has provided more ways to engage students, bring standards to life … and demonstrate learning in authentic ways while making real-world connections,” said Kim Busch, a teacher at Lakeshore Middle School in Mooresville.

“We treat teachers as professionals,” Norris said. “And they appreciate the opportunity to learn with university faculty and their peers.”

To learn more about the consortium and to access the online database of K-12 resources, visit www.civics.org.