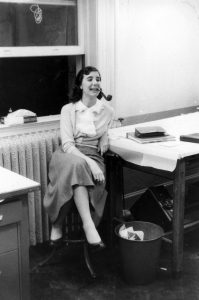 Pam (Jewett) Hitchcock ’58 from “The School That Jack Built.”

“In the ’50s, most male students smoked in class, especially in seminars. When asked a question, they would take out a tobacco pouch, fill their pipe, stamp down the tobacco, light up, and take a few puffs — before answering the question. As a nonsmoker and the only female, I was at a distinct disadvantage, so for a brief time, I tried smoking a pipe.

But what I find most interesting, looking back on this picture is the way I am dressed for class — a far cry from the way female students dress today! UNC had a dress code at the time. Women were not allowed to wear shorts or slacks, even in the lobby of the women’s residences.”

Remembering William Friday: Power, Purpose and American Higher Education (UNC Press) by William A. Link. Few North Carolinians have been as widely respected as William Friday (1920-2012), the former president of the University of North Carolina system, and professor in the College of Arts and Sciences in his later years. Friday is ranked as one of the most important American university presidents of the post-World War II era. Available for the first time in paperback, Link’s second edition is updated to trace Friday’s remarkable career and commemorate his legendary life.

The Scarlet Thread (Harper & Row) by the late Doris Betts. This reissue of the late North Carolina author and UNC English professor’s second novel features an introduction by Robert Morgan and essays by Sally Buckner and Marjorie Hudson. Set in the North Carolina Piedmont just after Reconstruction, it is a “story of liberation, of escape through vocation, of possibility even among seeming insurmountable barriers.” The book won the Sir Walter Raleigh Award for Fiction. A Permanent Member of the Family (Ecco HarperCollins) by Russell Banks (English ’67). A master collection of new stories from the acclaimed author of The Sweet Hereafter, Rule of the Bone and Lost Memory of Skin. Packed with Banks’ trademark lyricism and reckless humor, the books’ 12 stories examine the many ways that we try — and sometimes fail — to connect with one another, as we seek a home in the world. The New York Times calls Banks “the most compassionate fiction writer working today.”

The Making of a Southern Democracy: North Carolina Politics from Kerr Scott to Pat McCrory (UNC Press) by Tom Eamon (Ph.D. political science ’76). Eamon charts the state’s political transformation into a modern democratic society to show that this change was more than evolution — it was a revolution, one that largely came about through political means, driven by strong movements and individuals working for change. The book has been called “the most comprehensive analysis of North Carolina politics from World War II to 2012.” Eamon teaches at East Carolina University.

Pageants, Parlors and Pretty Women: Race and Beauty in the Twentieth-Century South (UNC Press) by Blain Roberts (Ph.D. history ’05). As Roberts shows in this incisive work, the pursuit of beauty in the South was linked to the tumultuous racial divides of the region, where the Jim Crow-era cosmetics industry came of age selling the idea of makeup that emphasized whiteness, and where, in the 1950s and 1960s, black-owned beauty shops served as crucial sites of resistance for civil rights activists. Roberts, an associate professor of history at California State University, Fresno, examines a range of beauty products, practices, and rituals — in settings that range from tobacco farms of the Great Depression to 1950s and ’60s college campuses. The School That Jack Built: City and Regional Planning at UNC-Chapel Hill, 1945-2012 (Department of City and Regional Planning) by Edward J. Kaiser ‘66 and Karla Rosenberg ‘12. Two UNC city and regional planning alumni have compiled a comprehensive, entertaining history of Carolina’s city and regional planning department. Jack Parker was hired by UNC in 1945 to start the planning program. The fledgling department flourished under his leadership for the next 29 years. A vibrant story with anecdotes by alumni and faculty and 100 photos.

Bringing God to Men: American Military Chaplains and the Vietnam War (UNC Press) by Jacqueline E. Whitt (Ph.D. history ’08). During the Vietnam War, chaplains’ experiences and interpretations of war placed them on the margins of both military and religious cultures. Because chaplains lived and worked amid many communities — religious and secular, military and civilian, denominational and ecumenical — they often found themselves mediating heated struggles over the conflict, on the home front as well as on the front lines. Whitt is an assistant professor of strategy at Air War College. The Southerner’s Handbook: A Guide to Living a Good Life, (HarperWave) curated by the editors of Garden & Gun magazine. More than 100 instructional and narrative essays teach you all you need to know about southern food, style, drink, sporting and adventure, home and garden, and arts and culture. UNC creative writing program director and professor Daniel Wallace contributes essays entitled “Rules of the Road Trip,” “Southernisms” and “The Great Southern Novel.” You’ll also find pieces by Roy Blount on telling a great story and Jack Hitt on the beauty of cooking a whole hog.

The Bible: A Historical and Literary Introduction by Bart Ehrman, and The Other Gospels: Accounts of Jesus from Outside the New Testament by Ehrman and Zlatko Plese (Oxford University Press). In The Bible, UNC religious studies scholar Ehrman presents a historical survey of the Bible that is comprehensive, yet succinct and easily accessible. One reviewer wrote: “It’s the next best thing to attending a college Bible 101 class.” In The Other Gospels, Ehrman and UNC religious studies colleague Plese offer the reader a compilation of more than 40 ancient gospel texts and textual fragments that do not appear in the New Testament. The book includes the controversial manuscript discoveries of modern times, such as the Gospel of Thomas and the Gospel of Judas Iscariot.

Lobbying America: The Politics of Business from Nixon to NAFTA (Princeton University Press) by Benjamin Waterhouse, UNC assistant professor of history. The book explores the role that large, national business associations — and their lobbyists — played in shaping economic policy and the conservative political movement during the 1970s and ’80s. Waterhouse takes readers inside the mind-set of the powerful CEOs who responded to the crises of inflation, recession and declining industrial productivity by organizing an effective and disciplined lobbying force. A reviewer called it “essential reading for anyone who wants to understand the history of the power of business in our political life today.” American Democracy: From Tocqueville to Town Halls to Twitter (Polity Press) by Andrew Perrin. UNC sociologist Perrin shows that while rules and institutions are important, they are not the core of democracy. Instead as Alexis de Tocqueville showed in the early years of the American republic, democracy is first and foremost a matter of culture. American Democracy provides a fresh, innovative approach to democracy that promises to change the way readers understand their roles as citizens and participants, and that they will “never enter a voting both or answer a poll again without realizing what a truly social act it is.” The Workboats of Core Sound (UNC Press) written and photographed by Lawrence S. Earley (Ph.D. English ’75). Along the wide waters of eastern North Carolina, the people of many scattered villages separated by creeks, marshes and rivers depend on shallow-water boats, both for their livelihoods as fishermen and to maintain connections with one another and the world. As Earley discovered, each workboat has stories to tell and a critical role to play in maintaining a community’s memories. Includes nearly 100 of Earley’s striking photographs.

Jonathan Edwards: Writing from the Great Awakening (The Library of America) edited by Philip F. Gura, William S. Newman Distinguished Professor of American Literature and Culture. Edwards is the 18th century theologian and leader of the Great Awakening, a series of small-town revivals that mushroomed into a movement variously credited with giving birth to American evangelicalism. This volume brings together all of Edwards’ still-stirring writings from and about the revivals, along with a map of the Connecticut River Valley, helpful notes explaining his theology, and a guide to his many scriptural references and allusions.

The Letters of C. Vann Woodward (Yale University Press) edited by Michael O’Brien. Woodward (1908-1999) was one of the nation’s foremost Southern historians, who earned his doctorate in history from UNC-Chapel Hill in 1937. Cambridge University Scholar O’Brien edits almost 300 of Woodward’s letters in this volume. Martin Luther King Jr. called Woodward’s book, The Strange Career of Jim Crow (1955) “the historical Bible of the civil rights movement.”

Dixie Redux: Essays in Honor of Sheldon Hackney (NewSouth Books) by Raymond Arsenault and Orville Vernon Burton. Historian William Ferris, senior associate director of UNC’s Center for the Study of the American South (CSAS), and former CSAS director David Moltke-Hansen have essays in this volume, a tribute to the late Hackney, who was tapped by President Bill Clinton to chair the National Endowment for the Humanities. Hackney spent his life focusing on issues closely related to civil rights, social justice, and the vagaries of race, class, regional culture and national identity. (In 1997, Ferris was chosen to succeed Hackney as chair of the NEH).

Apostles of Reason: The Crisis of Authority in American Evangelicalism (Oxford University Press) by Molly Worthen, UNC assistant professor of history.  This ambitious history weaves together stories from all corners of the evangelical world to explain the ideas and personalities that have made evangelicalism a cultural and political force. A reviewer wrote that Worthen’s book “brings a new level of sophistication, as well as sparkling prose, to the study of modern American evangelicals. A combination of empathetic understanding and critical acumen makes this an unusually humane, as well as an unusually insightful, book.”

The Days of Anna Madrigal (Harper) by Armistead Maupin (English ’66). The suspenseful, comic and touching farewell novel in Maupin’s bestselling “Tales of the City” series follows one of modern literature’s most unforgettable and enduring characters — Anna Madrigal, the 92-year-old legendary transgender landlady of 28 Barbary Lane — as she embarks on a road trip that will take her deep into her past.