Rod Brooks says he can trace his entire career path to his study abroad experience at UNC. (photo by Beth Lawrence)

Rod Brooks believes that hunger doesn’t have to exist and that we can end it in our lifetime.

Brooks (economics, Spanish ’89) takes inspiration from the words of Spanish poet Federico Garcia Lorca, emblazoned in bold black letters on a red wall outside his office.

“The day that hunger is eradicated from the earth there will be the greatest spiritual explosion the world has ever known. Humanity cannot imagine the joy that will burst into the world.”

Brooks is the president and CEO of Stop Hunger Now, an international hunger relief organization based in Raleigh that was founded in 1998 by Methodist minister Ray Buchanan.

On a trip last year to Uganda, Brooks had the opportunity to see firsthand the children who are benefiting daily from meals provided by Stop Hunger Now through its in-country partner, LeSea Global Feed the Hungry. LeSea feeds 7,500 children each day. While visiting with LeSea’s country director Solomon Mwesige, Brooks learned of his hopes and dreams of reaching out to other schools in slums outside Kampala. They visited one of those schools, a simple cinderblock building with a dirt floor.

School feeding programs entice parents to send their kids to school where they can get an education, Brooks said.

“Without food, there is no education, and without education, there is no hope,” said Brooks, as he scrolled through pictures on his phone of smiling kids holding bowls of rice and vegetables. “Fifty-two percent of the population in Uganda is 18 years or younger. We must decide now whether those children will be well-fed and educated — or not — and that will determine the future of that country.” 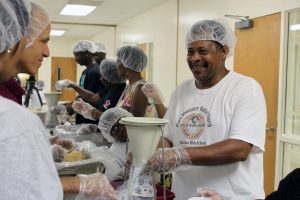 In 2005, shortly before Brooks joined the organization, Stop Hunger Now introduced a meal packaging program which today is providing meal distribution to 40 countries, primarily through school-feeding efforts like the one in Uganda. Meal-packaging events happen in 18 states, and the list is growing.

Since that time, more than 300,000 volunteers in faith-based and civic organizations, corporations and universities — even Miss USA pageant contestants — have packaged more than a hundred million meals to feed the hungry. UNC’s incoming first-year students are among those who have participated at fall orientation. A Campus Y organization called Carolina Hunger Education and Activism Project (C.H.E.A.P.) works with Stop Hunger Now throughout the year.

Volunteers come together to package small bags of rice, dehydrated vegetables, soy and vitamins. One bag can feed six people at a cost of 25 cents per meal, $1.50 per bag. Music adds to the fun atmosphere, and people cheer when the striking of a gong marks the completion of 1,000 meals.

“People 4 years old to 94 years old can participate, so there’s something for all ages to do,” Brooks said. “We hope that this is not the last step they’ll take in helping to end hunger. So we talk about what else they can do.”

Stop Hunger Now also provides in-kind aid such as medical supplies, clothes and blankets to people in need, as well as grants to organizations in partner countries that are combating hunger. Brooks, who spent 16 years helping to found the global museum Exploris (now Marbles Kids Museum) in downtown Raleigh, said he can trace his entire career to his study abroad experience at UNC.

He spent his junior year living and studying in Seville, Spain, and today is fluent in Spanish.

“During that year, I gained a different perspective on the world, and how, in spite of cultural differences, deep down inside we have the same goals and aspirations,” he said. “That experience created in me an interest in serving people around the world.”

Stop Hunger Now has forged an exciting new collaboration with Wine to Water, another N.C.-based international nonprofit focused on providing clean water to people around the world. At select meal packaging events, volunteers will have the opportunity to assemble water purification kits.

“We can empower people to make a difference,” Brooks said. “My dream is one day explaining to my grandchildren about how hunger used to exist and how we came together to end it.”