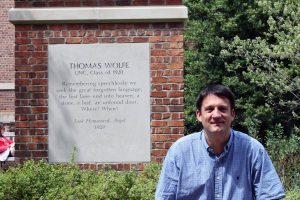 UNC historian Fitz Brundage in front of the Thomas Wolfe Memorial on UNC’s campus, which he says is one of the most dense commemorative landscapes in the state. (photo by Beth Lawrence.)

A new UNC digital collection, Commemorative Landscapes of North Carolina (CommLand), is creating a portrait of the state’s history through monuments, shrines and public art.

More than 250 monuments are now represented on the site. A year from now visitors will have access to about 400 monuments covering the entire state. The collection links users to a wide variety of resources, including historic postcards, photographs, newspaper clippings, printed publications, manuscript materials and maps that reveal how North Carolinians have commemorated their past.

The new collection is part of the University Library’s Documenting the American South project, which provides access to digitized primary materials that explore Southern history and culture.

Senior history major Cristina Orozco and her classmates uncovered information about a little known piece of North Carolina history, the Colored Union Soldiers Monument in Hertford, that was erected by the United Daughters of Veterans, an obscure club of African American women, probably  in 1910.

Only two years later, a Confederate monument was dedicated by a different group nearby. The Hertford monument is one of only a handful of Civil War monuments commemorating the contributions of African Americans erected anywhere in the country before the 1990s, according to UNC College of Arts and Sciences historian Fitzhugh Brundage, who is the scholarly adviser of the CommLand project. Nowhere else in the South did white and black Southerners memorialize their different memories of the South in such close proximity, he added. Only four city blocks separate the Confederate monument and the Colored Soldiers monument.

Involving undergraduate students in creating data on the monuments, as well as interpretative essays on historical memory, has changed the way Brundage thinks about teaching and undergraduate research. Being involved in a digital humanities project has also energized his work.

“It reminds me of the excitement that drew me to history in the first place, which was the excitement of learning things without being self-conscious about their historiographical or scholarly significance,” said Brundage, the William B. Umstead Distinguished Professor of History and author of the 2005 book, The Southern Past: A Clash of Race and Memory. “It’s simple curiosity. And there’s the possibility of finding new ways to translate knowledge to audiences that otherwise would not be exposed to it.”

One of those important audiences includes kindergarten through 12th grade students and teachers. CommLand partnered with the UNC School of Education and its Learn NC program to create a K-12 curriculum based on the collection, with the goal of teaching students to “read, write, think and speak like historians.”

An ambitious idea, a fun project Brundage collaborated with now retired UNC digital librarian Natasha Smith in getting the project off the ground, with the help of a $150,000 federal grant administered through the State Library of North Carolina.

The collection’s creators began by surveying commemorative sites in 25 Piedmont counties, in an arc from Rowan to Cumberland.

“We were also thinking about users not only [literally] seeing history carved in stone, but what does this mean?” said Smith, who worked on creating DocSouth about 17 years ago. “Why this monument in this community, and generations later, how will it shape the community and its memory?” Involving graduate and undergraduate students from multiple UNC schools and departments, such as the School of Information and Library Science, has created a “laboratory of hands-on experience,” she added.

The library has digitized more than 77,000 pages of manuscript materials and more than 29,000 pages of printed publications for the CommLand project, according to Jenn Riley, head of Carolina Digital Library and Archives. The library’s scanners can digitize about 100 manuscript pages an hour. Students have been involved in that process as well.

“Our vision is to provide services so that researchers don’t have to go at it alone,” Riley said. “This includes training students to be digital humanists so they can engage with the material and learn about methodologies to prepare them to lead their own projects later. The library is a research partner, and changes in technology are helping us to define ways to scale up digital humanities more quickly.”

The CommLand project complements the Carolina Digital Humanities Initiative, a major, university-wide commitment to the digital humanities that is supported in part by a grant from the Andrew W. Mellon Foundation. The Nathaniel Greene monument at the Guilford Courthouse battleground site in Greensboro.

Visitors can explore the site through a variety of ways. A timeline shows when the monuments were constructed, or you can click on a N.C. county to view the monuments in that county.

Want to explore the Capitol Square in Raleigh? You can take a view into the past, via Sanborn fire insurance maps from 1896, 1903 and 1914 — or use Google maps to view historical images in the context of the present-day landscape.

You can browse monuments by subject, such as political figures, local history, tragedy, sports figures, wars, even animals.

In a unique presentation of “then and now,” a 3-minute slideshow illustrates the dramatic transformation of the Guilford Courthouse battleground site in Greensboro, from its origin in 1887 to today. This quick snapshot shows that many of these commemorative spaces in fact don’t have a fixed meaning, rather their meaning changes over time, Brundage said.

The private group that first created the site envisioned an impressive avenue of monuments, including arches, that would be a shrine to the Revolutionary War. In the 1930s, when the National Park Service took over the site, many of the monuments were taken down, a large lake the founders created was drained, and dense vegetation overtook open fields.

Visitors can also explore a 360-degree view of the Nathaniel Greene Monument at the Guilford site, using the software program Photosynth. For 13 years (1982-1995), this full-scale cement sculpture of a hippopotamus was located in the Mill Creek branch off Bolinwood Drive in Chapel Hill. Local children frequently played on it. In June of 1995 the hippo was kidnapped! (photo courtesy of the Smithsonian Inventory of American Sculpture)

Erin Corrales-Diaz, a UNC Ph.D. candidate in art history, is developing a “best of monuments” map that will highlight some of the state’s most interesting monuments.

Using an artist’s eye, she’ll provide insight into the artistic, commercial and economic aspects of the monuments, through examination of the foundries, architects and sculptors behind some of the projects.

“I’m looking at the iconography and symbolism of the monuments. What form did they take? Did they use an obelisk or not, for instance?” Corrales-Diaz said. “This has made me think about how to incorporate more digital humanities work into my own teaching.”

Next year Brundage will co-teach a virtual seminar with his Western Carolina University colleague Andy Denson, who is interested in Cherokee historical memory. Their students will work together on CommLand.

“As a scholar, the minute we start talking about historical memory, people’s eyes glaze over; the language becomes jargony and opaque,” Brundage said. “Yet, with this site, we have been able to translate some of those ideas into a fashion that is immediately understandable.”